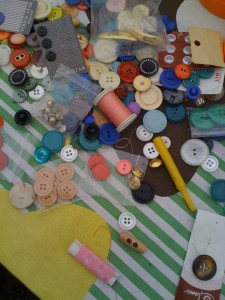 When they said Indietracks was held in a remote part of Derbyshire, they weren’t joking. High on road-trip junk-food and cursing the iPhone’s rubbish navigation, we circled Swanwick’s one-way system 7 times. But all rumours of troll-like staff were quashed when our weekend hero, Mr Gruff Yet Adorable Campsite Man, ushered us into the Arcadia of the Golden Valley Camping and Caravan Site. They have a pond… with geese!

The campsite is a ten-minute walk (or 5 minute road train ride) from the festival, and as the sun went down we wandered through idyllic Austen-style fields full of spotty ponies and cow parsley. We missed Allo Darlin’ (shame, as they were the talk of the festival) but did catch the end of Everybody Was In The French Resistance…Now, the side project of Eddie Argos, of Art Brut fame. Tongue firmly in cheek, he and sole bandmate Dyan Valdes attacked their set of “songs that disagree with other songs” with energy, the highlight being ‘We Formed a Side Project’ based on Art Brut’s ‘We Formed a Band’. That was it for Friday. We moped about a bit, disappointed at the early finish, but exhausted from our drive the lure of the tent called us back to the campsite.

Saturday was a beautiful day, and we started it by eating Victoria sponge at Swanwich station, and taking an old steam train down to the festival. As we rode down the tracks we saw abandoned train carriages rusting among the willows, a reminder that Indietracks is a real cash injection for the struggling Midland Railway Trust. One of the delights of the festival is the quirkiness of having it so closely linked with the railway. Onsite you can visit a working signal box, or the tiny model railway museum, where dour model railway enthusiasts watch the celebrations with bemusement.

The Callas were playing the indoor stage when we arrived, part of the Greek invasion of the festival this year, along with fellow Hellene, eclectic indie-dance DJ Astrogirl. Their deadpan post-punk art rock went down surprisingly well with the cuddly twee crowd. Outside the fantastic Antarctica Takes It! took to the main stage, providing our song of the weekend with the instantly hummable and utterly romantic ‘Lions of Love’. As they finished even the train whistled as it went down the track to Swanwick. Betty and The Werewolves easily packed out the adorable church stage, and had a whale of a time doing it, although it’s a pity the venue prohibited some arm-flailing indie dancing. Saturday’s headliners were 90’s Top of the Pops faves, The Primitives (a real plus for my twee-distrusting Boyfriend Michael), who spat out some heavy rock versions of their radio-friendly hits. That night at the campsite the fantastic Nat Shaw had a tent full of on-trend Catalan hipsters dancing like disjointed puppets to Bruce Springsteen and Girls Aloud as part of her Pic’n’Mixx CD swap extravaganza. She battled through technical glitches with verve, and we danced so hard I had to take my jeans off (a sure sign that fun’s being had, I think you’ll agree). By the end of the evening she and Boyfriend Michael had blown up three of the four speakers. Mr Gruff Yet Adorable Campsite Man told us they’d cost over a grand to hire, laughed at our crappy attempts at wiring, and sent us scampering off to bed.

On Sunday a couple got married in the signal box (if you’re reading – congratulations guys!). We were still snoring at this point, but hauled ourselves up in time on Sunday to catch Kurt Cobain’s top tip, Australian long-time pop rockers The Cannanes. Drifting into the merch tent to buy gorgeous vintage style brooches and bows, we caught Antarctica Takes It! doing an improvised acoustic singalong. By this time acts were already starting to get a little out of synch with each other, and so when we turned up to see The Sunny Street at the church stage, we instead caught surprise act Sarandon, three men who look, frankly, like middle aged music dweebs, and who played tight and frenetic three minute rock explosions such as ‘Kill Twee Pop’, held back from chaos by their super-slick drummer (who looked a little like Matthew “Silver” Fox).  Stars of Aviation held the little church spellbound with their folk sweetness, interrupted only by the gurgling of their new baby. Bless. As the evening drew in, Slow Club were sharp-witted and spectacular outside. The audience were flirting first-date style: laughing far too enthusiastically each time Rebecca Taylor launched another sardonic barb at Charles Watson (“You sing lovely Charles!” she deadpanned in her Sheffield drawl, as she motioned for the soundman to turn him down). The gloriously ramshackle ‘Giving up on Love’ made us dance so hard it raised a dust cloud, because while this song rocks on CD, hearing it live seemed to be the high point of the festival for a crowd dying for a singalong. The feel-good vibe continued right through The Pains of Being Pure at Heart’s headline set. Singer Peggy Wang’s sacchine-sweet and humble American gratitude felt a little disingenuous after some disappointing sound problems and some light drizzle, but the crowd were in a forgiving mood after Slow Club and it seemed to fit with the DIY vibe of the festival. We crept out before the end anyway. The magic was already fading and besides, we had to head home to put ‘Lions of Love’ on repeat and apply aftersun.

Indietracks is the ultimate community for twee indie-pop lovers. It is undeniably niche, which might put off some festival-goers. But what it lacked in variety, it more than made up for in friendliness. The location is stunning, the campsite clean, and the festival-goers (on the whole) loved-up and well-behaved. And where else can you see your favourite band members looking rough in the shower queue, mere hours before they go onstage?

Grow: A moustache. And wax it.

Eat: Curry, three times a day, and grow up big and strong.

Drink: Blue cider, that abomination of drinks, in an old stationary train carriage.

Travel: By steam train, of course!