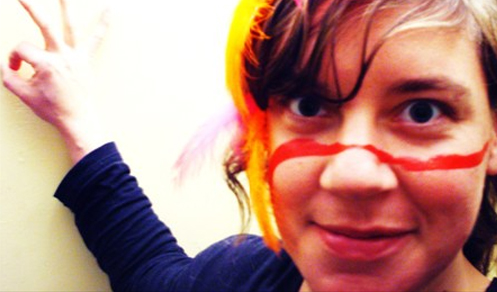 Merill Garbus aka tUnE-yArDs, opened her set with a primal, African influenced sound blasting out of her mouth and seemingly, going on forever. Was that her real voice? No laptops, no effects, no nothing? As she loops her own voice playing various rhythms and harmonies back on herself, she starts banging the two drums at either side of the mic and shouts at the crowd; ‘Do you want to live?’ What else can we say, except a hearty; ‘Yeah!’

Maybe I shouldn’t have been surprised – the song, ‘Hatari’ is on her debut record Bird-Brains after all, and throughout the album, Garbus samples her own voice, which is at times growling, at times softly whispering and layers it up with her own ukulele, percussion and bass.

But seeing it performed live is something else. The album has a soft intimacy about it, as if Garbus has taken a microphone into her home, recording snippets of her life and the people in it. But here on stage at London’s The Scala, Garbus herself embodies the sounds she’s making, widening her eyes in surprise for the high notes, and scrunching her nose when she’s sounding angry. And my, can she get angry.

A former drama student, Garbus is a natural performer and owns the stage, making the audience laugh by the mere raising of an eyebrow. It’s so refreshing to see a performer who has the balls not to care about looking cool and opens her mouth as wide as humanely possible just to get the right sound

She’s joined on stage by a merry band of geeky lads, two of whom also play drums while the others are on guitar and bass. They all look delighted to be there, especially one of the drummers who is like a four year-old prancing around his new toys and hitting things.

An encore is demanded, to which she plays ‘News’ and then ‘Sunshine’, two of the highlights from Bird-Brains, and for this last song, we’re reminded of just how versatile her voice can be, as she sweetly croons along to her ukulele.

Throughout the set, you catch the occasional excited smile shared between Garbus and her bassist, as if delighted at the sounds they’re making and can’t quite believe their luck. Judging by the rapture of the crowd, and the enthusiasm that spills out on to the pavement in Kings Cross after the gig, we can’t quite believe it either.