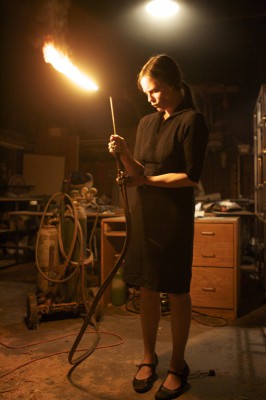 The show opens with Canada’s Ora Cogan. The one woman, one guitar, powerful folk songs set up is a common one, and although often Cogan’s songs sound familiar, they are never predictable or dull, but thoughtful and soft, and a joy to hear. Towards the end of her set she is joined by Triple Rosie’s Lizzie on the violin. While this does not detract from Ora Cogan’s music, it doesn’t add an awful lot, and it is clear that she is capable of creating full and beautiful songs alone.

Opening with ‘Just Do It!’, without any other introduction, Scout Niblett hushes the crowd with her intricate guitar work and powerful voice. Throughout the set the complex mix of strength and fragility is particularly obvious and entrancing. Her voice and guitar flit back and forth between a melancholic pulse to a perfectly pitched scream further heightened by the simplicity found in much of her music. It is clear that Scout Niblett is the master of the slow burner. Three songs in, she is joined by drummer Dan Wilson. Their connection is very powerful, with his drum breaks adding immeasurably to her songs. He doesn’t take his eyes off her for the whole set.

With all the intensity of her music, it almost feels like she breaks character between songs. With the end of each song she flashes the audience huge grins, often pulling poses of triumph. She seems happy and very friendly, frequently communicating with the audience and even initiating a question and answer session (for your information: she’s a libra, she never changes her strings, and her favourite colour is red). This only serves to make her more endearing, and further intensify the music.

Midway through the set Scout takes to the drum kit for ‘Your Beat Kicks Back Like Death’. Again, her voice is an odd combination of howling power and intricate control and, as ever, the crowd is rapt.

The entire performance holds the crowd and showcases this fragile talent. With every note she plays the audience is still. This is one of the quietest, most respectful audiences I’ve seen in a long time, and for good reason.