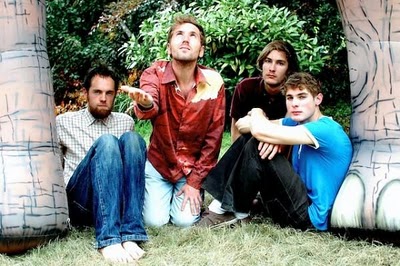 Last Thursday saw the brilliantly modest Stornoway take to the stage to play a sold out gig at London’s ULU.  Without fanfare they quietly assembled before our eyes amid a collection of tassled floorlamps, and began to create beautiful music for our ears.

Sighs of relief were felt all round when singer Brian Biggs apologetically announced his recovery from a recent loss of voice and string of cancelled gigs.  The loss was not ours, as his voice was enriched with a wonderfully gravelly edge, and a throaty depth not heard on their recorded material.

Stornoway know how to give just enough without overpowering, and clearly understand the danger of overkill by gratuitous fiddle strumming.  They held back enough to tease the audience and ease them in, revealing their full potential slowly, building up to a beautiful crescendo.  Midway though, as a hush spread through the crowd, Stornoway began to sing the poetic and evocative ‘Fuel Up’.  2 minutes later, enthralled and totally distracted by the song, I experienced one of those rare moments at a gig when you realise the entire room is singing along to a song whose lyrics most of the audience didn’t know 2 minutes ago.  Stornoway, who became so-named from a wish for a nautical sounding name, bring that same atmosphere to their live music.  In the crowd, you feel the waves of their music washing over you and pulling you in.

The band are very well suited to smaller venues.  What Stornoway’s music lacks in volume, it makes up for in depth.  They proved their versatility in making easy changes between held-back numbers such as ‘On the Rocks’ to the more upbeat and crowd-pleasing ‘Zorbing’ and ‘I Saw You Blink’.  Whilst we can imagine these latter songs translating well to bigger venues, the more low-key numbers felt like they might be reaching their optimum audience size in the moderately sized ULU.

With barely a whisper left to his voice, Biggs and co. made their exit from the stage.  The night proved that Stornoway have the potential to go a long way, and with just a small push could make a big leap into the spotlight.