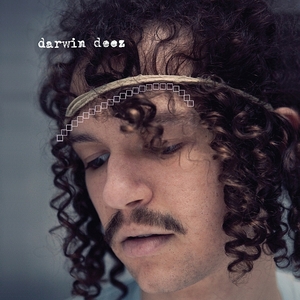 Darwin Deez are an intriguing concept. A band named after their lead singer (a trend that must always cause some tension amongst other members), and seemingly claiming to be a new breed of indie folk.  All the while, they make music that is not, by any stretch of the imagination, folk music.

If anything, Darwin Deez make indie pop music. Angular, halting pop music that will appeal to fans of Owl City as much as it will to fans of the NME.  There is, of course, nothing wrong of this and in fact the album opens with the terrific ‘Constellations’. In many ways Darwin Deez are perhaps bringing us a new breed after all – power pop, with a distinctly 2010 sound.  Though all the songs on the band’s eponymous debut are strikingly similar they are at least striking – more than can be said for much of the year’s alt-pop releases thus far. There are synthesised handclaps, a vague understanding of scientific concepts on the simple but enjoyable ‘DNA’. There is an undeniable sense of joy throughout the record. Joy in making the music that you want to make, living the life you want to live.

All things considered, Darwin Deez are not ground-breakers on any level.  Their genre of alt-pop has been done before a great many times, though perhaps usually with much less verve. To consider the band a new breed of folk, though, would be a fallacy.  At least, it would be in the same way that calling Metallica a new breed of swing music would be a fallacy – simply because for all their achievements, Darwin Deez are not a folk act. Are they any worse off for it? Not at all. Does it remotely matter, then? No, not really. Darwin Deez make enjoyable, if not a little shallow, music that can and should be enjoyed by people on its own credits, and not those of anyone or anything else.