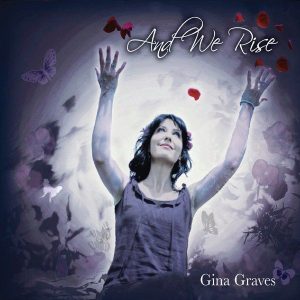 Although she bills her work as ‘dream pop’, much of what ultimately makes Gina Graves’ And We Rise feels like folk that’s hit the trendsetting indie scene. Presenting listeners with a multifarious smorgasbord of sounds to lose oneself in, there is definitely a fresh quality about her work that could distinguish itself as dreamy. Yet, it’s in Graves’ sweet, lilting vocals as they traverse these ethereal realms of audial delight that we are able to pull back the curtain a tad on the inspiration and inner-workings of these tracks. Therein lies a haunting, enlightened storyteller’s heart, savvily traversing innovative sonic accouterments to weave new textiles onto an old, well-loved quilt.

This is no dreary affair, either, but a well-rounded reflection culminating somewhere between the realms as close as folk and jazz and as far-reaching as ambient melodies and classical trimmings. To say that the music here is varied or textured may well be a grand understatement. And We Rise is as richly produced and thoroughly realized as it is, at its barest of bones, an inspiriting collection of songs to cherish. Laser-focused on enlightenment through positivity and perseverance, Graves offers her resplendent vocals to interpret songs reflective of the ever-needed presence of hope and love in our lives.

If one instrument were at the core of And We Rise, it’s the emotive melodies that Graves paints with her piano that stand out alongside her reassuring, sometimes haunting voice. Considering her bachelor’s degree in piano performance, as much might be understandable. It really is a particular piece of her already brilliant arrangements that elevate them, making each song an inspiration and a standout for its own individual reason. Here, we’re given the best of both realms — a supreme layer of scintillating polish does not pave the way for lyrical mediocrity. Every bit of And We Rise is worth giving an ear; both ears, even.