With even a cursory pulse on the indie music scene, it would have been hard to not come across the name Phoebe Bridgers—a Los Angeles-native indie folk singer-songwriter—within the past few years.

Bridgers was featured on an Apple iPhone commercial a while back. Bridgers released her critically acclaimed debut album Strangers in the Alps last year (which FFS positively reviewed) while her hit single “Motion Sickness” was all over the radio and YouTube. She had a freakin’ NPR Tiny Desk Concert for crying out loud.

And now, a headline tour stretching from North America to Europe and back again. Bridgers followed up a sold-out Wednesday show at San Francisco’s Great American Music Hall with a more intimate performance at Sacramento’s legendary Harlow’s on Thursday, 19 July 2018.

This actually happened to be Bridgers’ second time performing at Harlow’s as she previously opened for Mason Jennings way back. This time around, however, it would be lo-fi indie folk singer-songwriter Lomelda (real name: Hannah Read) starting off the evening.

Bridgers’ return was a long time coming for many noticeably diehard fans in the audience.

“Sac loves you!” shouted someone, to which Bridgers lovingly responded, “That’s nice.” It would be one of many fan interactions she had over the course of the show, replying to audience shout-outs, complimenting fans’ shirts, and even plucking a lucky someone from the front row to help duet a ballad. The latter provided a bit of comedy relief as a stagehand attempted to escort the fan off the stage near the duet’s end before being waved off.

“I invited her,” assuaged Bridgers. “Thank you for you trying to keep me safe.”

Despite the blip, Harlow’s was shockingly quiet—almost dead silent—for much of Bridgers’ stage time, which only intensified the mood and sound since the bulk of her catalog is slow, steady, and stirring such as “Smoke Signals” and “Funeral” (although my position in the crowd thankfully may have shielded me from most external noise). 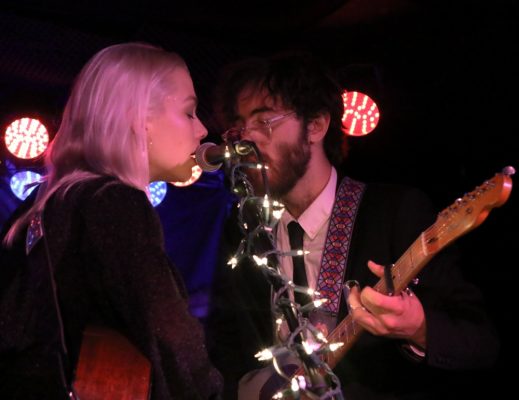 The evening’s highlights were the rousing “Georgia” and breakup anthem “Motion Sickness” (which Bridgers referred to as being about the “Donald Trump of indie rock”). I thought it a bit weird that the band would perform the heartbreaking “You Missed My Heart” as the first encore song (although she basically ends her album with it), but the choice made sense after she closed out the set with a raucous cover of Sheryl Crow’s 90s rock hit, “If it Makes You Happy.”

Phoebe Bridgers exuded confidence and radiated warmth as she successfully avoided the trappings of a predominantly downtempo set with funny quips, embarrassing stories about her bandmates, and a potential spoiler about her Halloween costume (Hint: It’s View Askew-related and may include friend and fellow singer-songwriter Julien Baker). That might not sound totally relevant for a single concert review, but it all added up to the revelation that this artist did live up to the extraordinary hype.