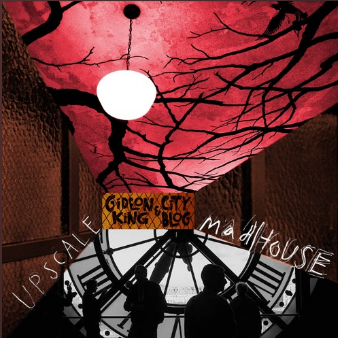 Taking a page from the golden book of Steely Dan, Gideon King & City Blog take some of the objective best pieces of folk, jazz, and other genre influencers and shake them up into a delicious mixer. They do so, too, by heavily accessible means, with oftentimes relatable stories and delectable hooks gluing their work together as well as the unsuspectingly grand level of musicianship brought to the table does. A reputable jazz icon of his own right, King established City Blog in 2015, relishing in the development abstract—yet very nearly poppy—fusion since. Based out of New York City, their newest album, Upscale Madhouse, is in part inspired by the Big Apple.

With an opener named ‘Straight to Hell’, Upscale Madhouse plays out a lot more fun-loving and charismatically than the words on its opening pages may initially tell. King’s vocals are produced with an ethereal step on the opening track, with an ebullient vibe emitting from its easy-going, very mildly funk-influenced instrumentation to seal the deal on its “in space” style. It isn’t necessarily a positive theme that drives the song forward, but the music is infectious. It’s hard not to smile with the sheer level of musicality that unfurls on what, at first, seems like such a minimalistic track—swirling guitar riffs and layers of vocal harmonies sealing the deal on its cordial complexities.

This sort-of unsuspectingly easygoing style pervades the album from tip top to toe. The title track follows ‘Straight to Hell’ and gives ample presence to a scaling piano and rollicking guitar to the point that King’s whiskey warm croon is met equally by his band. They elevate each other. The golden saxophone clause is invoked by track three with a fluttering solo before driving straight into a Stevie Wonder-esque soul jam on ‘Fake It On Facebook’—a tune developed around an infamous New York street story. The wonders don’t stop in the album’s second half, most notably with the gorgeous stylings of a soulful female vocalist on ‘So Evolved’ before ending it sweetly with a short instrumental bit.

As it turns out, King’s Upscale Madhouse is well-worth checking into.