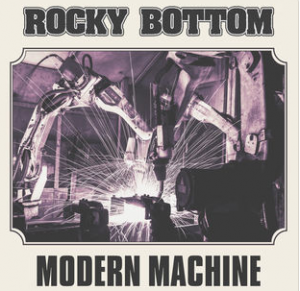 It’s been a long past year for Alex Hernandez and his solo project, Rocky Bottom. Not unlike Alejandro-Rose Garcia, he donned himself a stage name and hopped straight into relative acclaim with his blend of gritty blues and searing folk. Where he doesn’t aim to innovate in regards to Shakey Graves’ iteration of the one-man band, Rocky Bottom paints sincere and crystalline works of art reflecting the human spirit.

In these regards, he’s more of a folkster than he is an indie rocker. Yet, there’s also a certain amount of southwestern grit that he introduces to his tunes that is fully evident on his latest EP, Modern Machine. Given his roots in the New Jersey punk scene—unusual for a folk artist, to say the least, though not unprecedented—this won’t come as too much of a surprise.

This darker side to his artistry is entirely on display in the swampy soul of ‘Family Reunion.’ This may be well more infectiously listenable with its vaudevillian sway than would have been outwardly expected of Hernandez’s more heart-on-his-sleeve way of writing. Although, it’s actually a refreshing change of pace to feel something more reflective of an overall scene from the singer-songwriter, especially when it takes a somewhat morose turn.

The cream of the crop here for this writer, though, is the heartbreak of ‘Someday.’ A straight-shooting folk tune of a love lost, Rocky Bottom exemplifies the profundity of his songwriting best by speaking from his heart. The titular opening track and the EP’s finale, ‘Love Bug,’ are no slouches either, and these four songs as a whole do well in showcasing Hernandez’s various “sides” as Rocky Bottom. If any of this sounds intriguing to you, you can hit up iTunes to give the EP a preview and purchase.