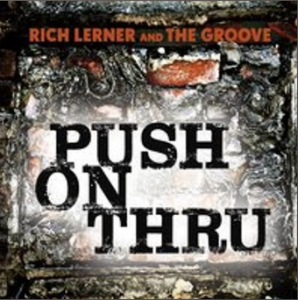 Every so often, rock and roll royalty is born. For every Joplin, Hendrix, or Jagger, though, are tens, if not hundreds, of should-be legends of the craft who burst into their respective scenes with a roar and keep on chugging ever since. Such is the case of Rich Lerner (the North Carolina rock icon, and not the golfer), who’s been churning out albums since the 90s when he rocked out on Rockduster with four solo outings prior to putting together a band, The Groove, in 2000. Since then, the band has graciously aged into a consummate group of musicians who wear the medley of influences- ranging from the Grateful Dead, Dylan, Leon Russell, and some funk and soul this side of Stevie Wonder -on their sleeves to collectively make something new and full of heart.

For a band who have exploded in their hometown scene to the point that they’ve been pushing forward with their own music festival in the name of charity for years now, you can bet that they’re good. Push On Thru is the latest from Lerner & the Grooves and from the titular opener on forward, one can only assume (and correctly, at that) that they push on through just fine as the should-be titans that they are. There’s a bit of rhythm and blues sprinkled between their rocking blues overtones that act as the primary staple of the album, along with some honky-tonk vibes brought about here or there like on ‘She Kept My Room Warm’. ‘Love Monkey’ proves that the band can keep things playful with a take on rhythm and thematics not dissimilar to some of the work that Steven Tyler has churned out over the years, with a familiar Dead-esque psychedelia setting the mood.

On the overall, one can’t go wrong with Rich Lerner & the Grooves. It’s some old-school western-tinged rock and blues to summarily whet the palate when there isn’t much of it to go around these days. For what it is, it’s quite good.