Singer-songwriter Michael Kiwanuka, whose 2012 debut Home Again drew comparisons to the greats of 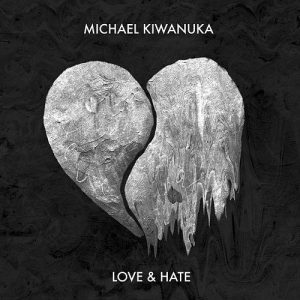 soul music, has joined forces with producer Danger Mouse for his second album, Love and Hate: a wonderfully intriguing pair of unique, talented artists whose music will seduce and intoxicate you from the start.

The sweeping, epic, ten minute long first track, “Cold Little Heart”, absolutely drips with longing and with style. It’s cinematic, a bit dark, a bit emotional, psychedelic, soulful, and the most satisfying of reassurances that Michael Kiwanuka and Danger Mouse are a match made in heaven.

The album’s first single, the foot-stomping “Black Man in a White World”, and the hypnotic title track “Love and Hate” are great tunes. But the real gems are the songs that are stripped down and raw, when the spotlight is on Kiwanuka’s voice- which is among the most genuinely soulful voices out there, hands down- together with a simple, haunting guitar riff or two. “Falling” and “I’ll Never Love”, particularly, are strikingly beautiful.

Love and Hate makes you ache and long for something almost within reach. This is its brilliance. Love and Hate doesn’t just convey longing, it produces it. As the listener, you feel what Kiwanuka feels. His sorrow. His protest. His honesty. The darkness and acceptance of his loneliness, both in the (timely) examination of a divided world and in the dully-heartbreaking personal confessions: “I’ll never hold somebody for very long/I may love but only for the night/And I’ll be gone”.

With help from the magical touch of Danger Mouse, Kiwanuka has been able to create a second album that expands on, experiments with, and grows from the sound of his 2012 debut Home Again. But I’m left with the same conclusion: it isn’t just a soul album. It’s an album with soul.