This release couldn’t have come at a more appropriate time. With anti-immigration and scapegoat antics 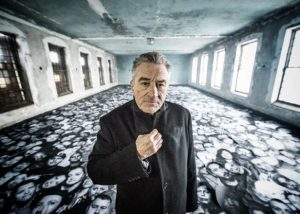 The soundtrack features only two tracks, “Winter Morning I” and “Winter Morning II,” and they are vastly different. “Winter Morning I” is nine perfect minutes of gorgeous deep bass, tracked underneath gentle harp-like piano tones, seemingly meant to sound like a very somber snowfall. At times, you can hear creaking sounds, faint footsteps or whispers, or the occasional deep inhalation. There are slight pauses, creating mindful negative spaces within the composition.

“Winter Morning II” opens with an ominous bell toll, followed by a long throaty bass note, gradually crescendo-ing to an intense pitch. It features some of the dialogue from Ellis played out as Robert De Niro’s moving spoken word on the immigrant experience, and is punctuated by more bell tolls and a rather eerie accordion solo. De Niro’s dialogue includes lines like “I came here because I wanted a home, where I can find peace, where I can be treated like anyone else, where I can be anyone I want to be.”

Ellis is an unusual combination of talents, but Woodkid’s compositions and Frahm’s famed musicianship have resulted in a stirring and eloquent soundtrack to an equally haunting film. The album is more than worth a listen, and the film will certainly be worth a watch when it debuts.