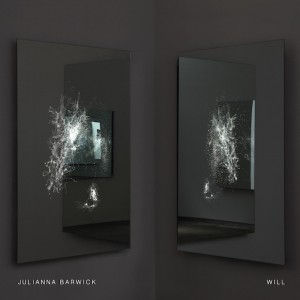 to spectacular terrains. Will is a vehicle for voice, strings, and consuming electronic flourishes that combined take a hold of the listener. Barwick knows her musical self and is not afraid to deliver the vision of her modern church music.
‘Nebula’ grows in waves, floods the room with water and fills the space with light. It’s hypnotic and was an obvious choice for the lead single from the record. The blend of choral voices and electronic wave vibrations is impossible to resist. It is music that does exactly what it wants, goes where it has to. It is not created for false pretences, and it succeeds in opening up a world that could suitably soundtrack many a film, or scene, in just about anything. It’s quite glorious.
Will also demands little of the listener. It feels like a holiday. A place of total rest and relaxation, an oasis, a paradise. All you can do is get lost, deliberately. It’s overwhelming at times. It may not stray much from the formula, but the tracks do more than enough to be ‘go-to’ music for dark times. It’s medicinal, it’s therapeutic, it’s beautiful. It also feels unique, in its blend of old and new, voice and electronica.
Even down to the cracked mirror and pristine mirror on the cover, each reflecting the other, a sense of calm amidst the surrounding madness can be felt. When a piano enters on ‘Big Hollow’ it feels like warmly being ushered in through the gates of heaven. It’s such delicate and heartfelt music it feels like faces of loved ones, smiling through it all, a salvation at the end. The warmth of ‘Heading Home’ and how it feels like just that, arriving back in loving arms, is once more Barwick at her best.
In 9 tracks, spread over 39 minutes, Barwick affirms herself as a musical original, a leader, and a voice to listen to, even if the words cannot actually be deciphered. As with Nepenthe, Barwick has once again made a near perfect little universe on Will.