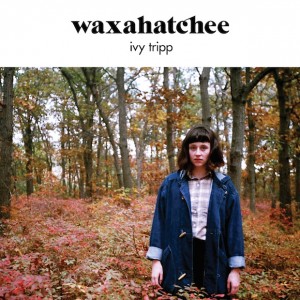 Ivy Tripp is Katie Crutchfield’s third record under the name Waxahatchee, but just because she’s settled into the role doesn’t mean she’s ready to stop moving. Over the course of this record, Crutchfield never sits still, and offers a little something to everyone. There are short, sharp blasts of rock; evocative and though-provoking ballads; and an endearing oddness to everything here. It’s radio friendly, but hardly commercial, with a fine balance of pop and rock, weighted intelligently.

‘Breathless’ opens this affair and it immediately pulls the listener in close. It feels personal, brutal, vulnerable. The mood from the offset is conflicting, slightly uncomfortably. It’s dark and yet with shards of light gleaming down. It’s a strange kind of beauty, but it’s certainly beautiful. At times, Crutchfield can sound like a girl, at others like a woman who has fully blossomed. The mix on this album keeps the listener on their toes; it’s playful and experimental. Crutchfield seems to know she might make mistakes along the way, but they don’t matter – and therein lies the appeal. She is open and willing to fail, and that makes her easy to love. It is not hard to submerge fully in this album and the mind of its creator. Anyone who loves a good pop song will find something to enjoy here, but you can go deeper too. Slower songs like ‘Blue’ have a soul and grace that the sharper, poppier numbers don’t. This is when she really sinks her teeth into the listener, and has a knack of reducing them to rubble.

Parts of this record evoke Alanis Morrissette at her best – no small thing given the success the Canadian enjoyed – but Waxahatchee is a not a tribute act to anyone. Ivy Tripp is another step forward and see Crutchfield continue to build on her early promise. Don’t be surprised if you come across her on the radio or a prominent spot at the summer festivals as this record marks her true arrival. Add this to the list of 2015’s best music.