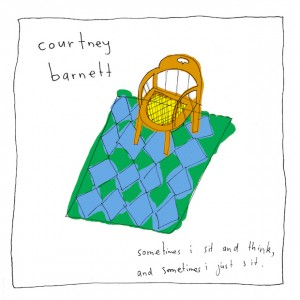 Courtney Barnett’s full debut arrives with high expectations – and rightly so, given the strength of the two EPs that came before it. Collected together in 2013 as The Double EP: A Sea of Split Peas, those records earned her a cult following for the lazy vocal delivery of razor-sharp lyrics, creating instantly lovable, original and addictive songs.

Since then, Barnett has grown, both in confidence and in her musiscal spectrum. The two singles which preceeded the release of the new album gave us two sides of Barnett – ‘Pedestrian at Best’ being the mesmerizing rocker and ‘Depreston’ a slow but jaunty ballad. Sometimes I Sit And Think sees Barnett build on those themes and fully establish her identity. It’s easy to hear why she has so quickly gained such ardent fans – she does what she wants in a unqie way. It sounds so relaxed you could imagine she almost doesn’t care, but the bite in her lyrics make clear the passion that exists. It’s a refreshing, dynamic mix.

The songs range from the low-key, almost not-quite-there quiet to full-scale cinematic anthems. Along the way Barnett tackles every day tales of ups and downs, in the cities, the suburbs and the countryside as she lets her stories roam. Two epic seven-minute tracks, ‘Small Poppies’ and ‘Kim’s Caravan’ show Barnett’s talent of letting her songs slowly unfurl, adding a new dimension to her writing, while the tightness and energy of her band give her all the foundation she needs. It’s by no means perfect, with peaks and troughs, but it’s loaded with potential. Whether she can make the leap to greatness remains to be seen, but it seems certain she is here to stay.