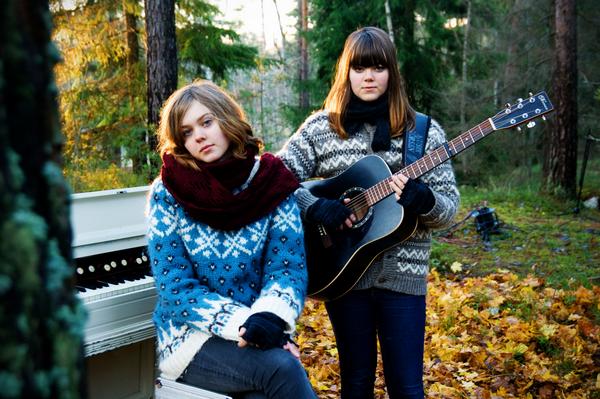 Having performed at Hammersmith Apollo nearly three years earlier whilst supporting Jack White, the Söderberg sisters are back in this prestigious West London venue; this time the five thousand strong crowd are all there for them…

Arriving on stage to a rapturous reception the duo are draped in gold and black and covered in sequins, beautifully mirroring their intricate backdrop. As a spotlight falls on Klara the acoustic howls of ‘Lion’s Roar’ float out from the stage. It’s a flawless performance, with Johanna’s rich vocals adding texture and richness to the full band sound which First Aid Kit now adopt.

It’s testament to the quality of the Swedes’ songwriting that they can lead with arguably their biggest song and continue a 90-minute set without ever dropping the quality; instead filling it with gorgeous indie-folk anthems ‘Stay Gold’, ‘Waitress Song’ and ‘Master Pretender’.

“We’re gonna play some party tunes now!” exclaims Klara. “This one’s about a middle-aged woman with depression” corrects Johanna with a wry smile upon her face – before the duo perform a lush, stripped back version of ‘Blue’. The sister’s humour between tracks adds lightness to their earnest performance. The party does eventually arrive however, in the form of 2012’s ‘King of the World’
and their latest upbeat effort, ‘Heaven Knows’. It’s an energetic display by the sisters, with Johanna thrashing her long hair as she slams home the latter’s closing chords.

Their undeniable talent shines through on a cover of ‘America’ by their musical hero Paul Simon. They originally performed the track live back in 2012 when Simon won the prestigious Polar Award. “It was probably the scariest most nerve-wracking thing we’ve ever done” say the duo; though they received a standing ovation from the legendary songwriter, so it obviously impressed. It’s easy to see why, as the duo’s soaring harmonies and delicate guitar work make for a spell-binding performance.

The set closes with the beautiful balladry of ‘Emmylou’; a gorgeous ode to love and finding a muse. It’s a genuinely touching moment as the crowd sing every word of this simple anthem back at them until the song reaches it gorgeous conclusion. I’ve seen First Aid Kit perform at numerous festivals and on their last UK tour at Shepherd’s Bush Empire, however, this was a different. There was a gentle confidence about them, a level of assuredness which has grown alongside their ever thriving popularity. Tonight was a golden performance in what looks to be a very bright future.