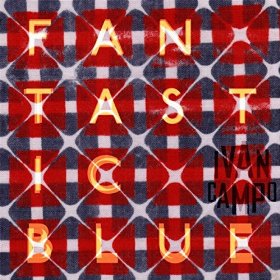 Fresh from an appearance at this weekend’s Green Man Festival, Ivan Campo continue the celebration of their tenth year with their ninth album release Fantastic Blue. The trio – Adam Shaw (lead vocals and guitar), Ben Atha (Bass) and Will Rogers (Keyboards) have come a long way since meeting on the same music course at Preston University with Will’s love of Bolton Wanderers inspiring the band’s name (former Real Madrid man Ivan Campo was one of the club’s more unlikely signings but made over 150 appearances)

This seven-track release contains more of the band’s multi-genre inspired music and is their first release for the Debt Records label. Opening track ‘A Chancer’ dips into their combined reggae influences with a strong bass line bound with indie intent. ‘Archimboldi’ is a more reflective affair that’s pulled along by an introspective guitar tone and by the time you reach title track ‘Fantastic Blue’ you’re fully entrenched with the variation that this talented group possess. Shaw’s vocals take centre stage for the song with a psychedelic backdrop creating a unique sound.

The build up to ‘Liquor Mountain’’s joyful chorus is superb with ‘Memory Lane’ and ‘Peddle Bike’ again moving to differing scales. The best is arguably saved for last, though, as ‘The Man Who Sold The Melody’ has strong echoes of The Beatles and is an outstanding stand-alone track that brings a fantastic record to a close. Ten years in and these boys aren’t done yet – not by a long way!