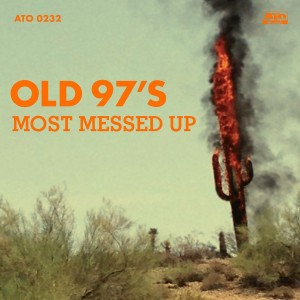 Texas’ the Old 97’s have been gracing us with their special brand of country-flavoured indie since 1993. Six years after their last studio album, they return with their eighth, and have truly outdone themselves with Most Messed Up.

Having listened to the album all the way through twice during a six-hour drive, it proved to be the perfect highway music. There’s nothing you’ll want to skip here, even if you do suffer from music ADHD.

The album kicks off with a rocking tune, coincidentally about rocking. ‘Longer Than You’ve Been Alive’ sees Rhett Miller offer thanks for their good fortune in making a living out of music over wailing guitars, but as with so many Old 97s songs, what stands out are the raw and powerful lyrics. “We’ve been doin’ this longer than you’ve been alive/Propelled by some mysterious drive …” Miller sings, setting the blueprint for the rest of the album.

Although there is plenty of variation in style, the vibe is constant throughout, and filled with Miller’s great lyrics. “I’m only human though I’m super at times,” he sings on the opener, and he might not be wrong.

‘This is a Ballad’ is the Old 97’s take on, you guessed it, a rock ballad. This is a roll-down-the-windows-and-crank-the-volume type of song, which are the type of songs I live for. The pace changes for ‘Nashville’, which opens with an acoustic sound before delivering an engaging story.

But witty as Miller’s lyrics are, my only quam with Most Messed Up was the amount of repetition, at least thematically, in the songs. There are only so many stories of drinking, partying, rock and roll and women we need to hear, and some more lyrical depth would have gone a long way.