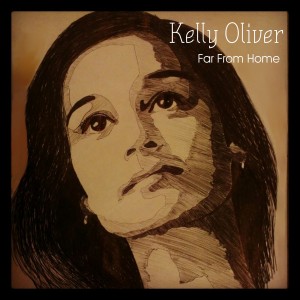 Kelly Oliver’s songs are full of clear traditional folk melodies; fans of The Staves and The Unthanks might want to give her debut EP a whirl. Title track ‘Far From Home’ features voice, guitar and the odd flourish of accordion, telling a lucid tale of lost love. Oliver’s voice is sanguine, and this song is a ballad, in the sense that things ‘just happen’ rather than being emotionally picked apart: it’s a storytelling song, not a mourning song. ‘Keilan Are You Coming’ keeps up this cheerful momentum, but with more excited anticipation, more of a sense of something at stake. ‘Grandpa Was A Stoker’ is, lyrically, one of the most substantial songs, a tale of endurance that aligns Oliver’s work with the Unthanks’ historical narratives.

However, Oliver puts pain in a major key: “the work was hard, you wouldn’t believe” is followed by a jolly blast of accordion. The ship’s journey ahead elides any sense of suffering, which is, acoustically at least, laying the ground for an adventure. ‘He Walked On This Side of the Sea’ is poppy and pure-hearted; the relationship the song describes doesn’t last, but the encounter is nostalgic and tender. The lyrics to ‘Brazil Song’ are more questing and combative, singing: “You know much, but I’ll show you more!”

I’d like to see this “I’ll show you more!” sentiment moving her songs forward, too: Oliver’s lyrics and voice are good, but every shift in pace and key is where I’d expect it to be. She could work to expand the emotional palette of her melodies and vary the texture and pace, but she has crafted a comforting base for her sound that will please many listeners.