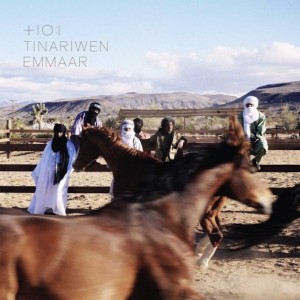 For fans of the band the sound is familiar. Tinariwen’s Emmaar sounds as gutsy and confrontational as ever. It is both symbolic of the band’s culture and its in your face, whilst also being soulful, gentle and offering a sense of peace. It certainly is no mean feat.

From the start of the opening song the spoken words set the scene. We are in the middle of the Sahara desert, a bunch of Toureg warriors have plugged in and are another collection of songs from blowing its audience away. So, few who aren’t from that part of the world will understand a word that is sung, but it’d be hard to find a band whose message came across more clearly in it’s blustering energy and passion than this one. No matter the tempo, or the vibe of the song, this group is capable of breathing endless life into any song it creates. The very essence of the songs creators emerges in everything they touch. As they get older, it’s debatable of course, they seem to get finer. The wisdom of age, spilling from the songs.

The band ever maintains its hypnotic edge. It remains true to its roots whilst having appeal not usually reserved for bands that make tribal blues music. The band deserves every modicum of interest and praise it receives, as it continues to plough the same terrain with a restless desire to communicate its land’s beauty and wonder that always leads to brilliant new music. The rhythms and the range of material is similar to other records, but it feels somehow even more sharp and urgent here. It’s intoxicating from the offset.

I remember when I saw the band live some years ago and it was like being put under a spell. It’s not quite as manageable on record, but the intricate and relentless guitars still manage to welcome the listener into a trance.

Not is it just a fine record, but the band’s music makes you wonder about their homeland, and what it’s like to live there, to breathe their air. Perhaps that is the most special aspect of the band, of which there are many.

In short, it’s a beautiful record, with much to get lost in. You may not understand it, but the key is to not even try. Let it wash over you and you are in for a spectacular surprise. It gets harder and harder to dispute, Tinariwen are one of the best bands on earth.