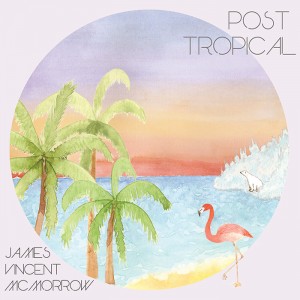 The opening voice sounds so close to the ears, it’s clear, personal and rings into the distant emptiness. It’s a nice opening. The voice is lovely in fact, though the song doesn’t really do much or go anywhere. It’s lovely but not remotely demanding. When halfway through the opening ‘Cavalier’ James Vincent McMorrow hits those high notes it does sweep the listener up. It’s not just about that sensation in music though, it’s about where it then takes you. It isn’t clear where he wants to take you, so once picked up it’s a small disappointment.

The immediacy of the voice in these gentle lullabies is maintained for the most part of the ten tracks on Post Tropical. What the Irishman does he does indeed do well, but it lacks the gut wrenching realism of someone who has lived through sparkling and dark days and can perhaps get that across in music. It’s all a little too similar and a tad comfortable. There is little by way of highlights and no terrible moments. It just doesn’t make the listener feel enough. The burst of colour on the cover wouldn’t seem to accompany the music on the record very well either.

It’s hard too not to think McMorrow is a big fan of Justin Vernon’s work, as it seems to reach for Bon Iver proportions of emotion and impact. While it doesn’t hit those colossal heights of beauty, there is much here that will satisfy existing fans and might just garner a whole new army of fans.

In short, beautiful in parts with some sweet vocals the songs don’t quite present enough variety and over the course of the record it feels like one long constant, rather than emotionally having ups and downs symbolic of a real life journey.

Repeated listens always help to define a record’s differences and key moments, where they might not be possible to immediately spot, but on several listens this album doesn’t reveal secrets as one might hope. Perhaps, if McMorrow was a little braver to explore and not stay in such a narrow zone of creation he could come up with something more than just lovely, but inspiring, powerful and ambitious too.