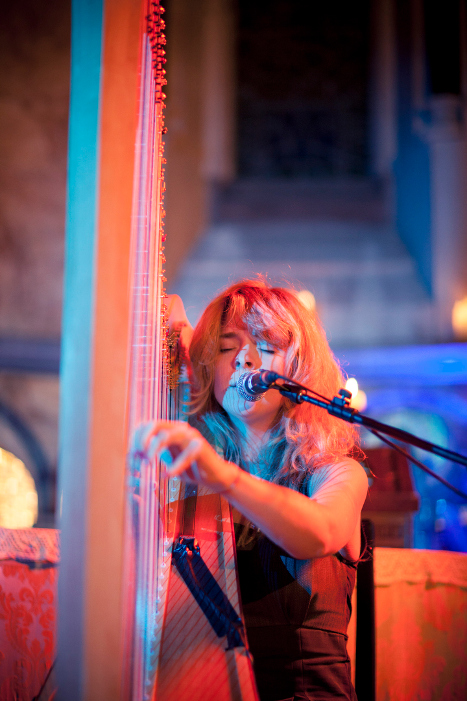 An evening curated by Jarvis Cocker was never going to be dull. Hosted in their tiny chapel by the House of St Barnabas, a private members’ club that uses its profits to operate as a charity for the homeless, this certainly promised to be a unique night. What with the scarcity of tickets and the virtue of the cause, it’s a wonder I hadn’t died of smugness before it all started.

Lucky that I didn’t, since I would have missed out on a truly exceptional medley of aural delights. Britpop poser, bum-waggler, tweed-fetishist – call Cocker what you like, he certainly can put together a line-up. In his latest role as Finder General of the Eccentric and the Esoteric, he has brought us a myriad of gems from the worlds of music, poetry and spoken word for his 6 Music radio show – and by his own estimation, this night was rather like a live version of that.

Dare I say it was even better. We began in spectacular style with a Restoration instrument I’d never even heard of before. Did you know that during his sojourn in London Benjamin Franklin found time to invent the glass harmonica, a tapering pedal-powered instrument resembling a fat glass slug, for which Mozart, among others, wrote several sonatas? No, me neither. So that was something. Alasdair Molloy gave a spectral and delicately beautiful showcase of the instrument’s capacities on this replica custom made for him (the originals were all smashed back in the day, accused of working devilry on the minds of those that played them – actually a side effect of the lead-based paint used to mark out the notes).

The strange and the new was the leitmotif for the evening. There was San Moritzz, a man displaying the greatest ratio of pedals to keyboard I think I’ve ever encountered, taking us through a soaring symphony-like soundscape that made something epic of the humble ivories (hear The Demolished Man from this Sunday’s Service). Now Will You Listen?, an instrumental storytelling group – featuring, among other percussive treats, a musical saw – gave us tales that were eerie, haunting, and silly.

Quirky comic relief was also provided by performance artist Julian Fox: but the highlight of the bill – and the main reason for review in a folk magazine – was Serafina Steer, she of the haunted eyes and the magnificent harp, whose most recent album The Moths Are Real was produced by Cocker himself. I saw her last at Latitude this summer, where the open air swallowed up some of the layered melodies, and the performance was a little faltering. Her between-song rapport is still charmingly self-deprecating, but she comes across now as an altogether more confident performer, completely in charge of the complex polyphony of her songs, which chop and change rhythms, swell and ebb, and map detailed, almost prosaic lyrics, across intricately woven melodies on the harp strings.

The tiny chapel provided the perfect acoustic to bring out the melding of chords and melodies in her songs, which are as finely constructed as the most ornately carved frontispiece. She sings of the everyday but in a querulous ethereal way which is perfect accompaniment to her otherworldly instrument. Fact: you do not see enough harps out there on the circuit, no you do not. Check out, if you have not done so already, ‘Night Before Mutiny’ (below) and ‘How to Haunt a House Party‘.

In between the segments of music and spoken word we retired to the members’ room for exclusive DJ entertainment from Viscount Cocker and his stalwart deck-spinning sidekick Mr Steve Mackey. Certainly this reviewer felt that the general company in attendance did not make adequate use of so rare an honour, and sought assiduously to remedy this with her own dance-based stylings. His Grace was not available for comment after the event, but sources report that at one point he definitely raised his eyebrows above those famous spectacles as if to say ‘what the actual hell?’. Oh I see, inspire a generation to wild angular gyrating then denounce your flock, would you Cocker? Honestly, the double standards of the music industry…

The House of St Barnabas puts on regular events, details of which are available on their website.