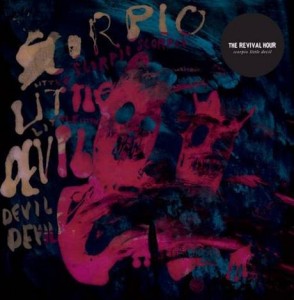 The Old Fashioned Revival Hour, an evangelical radio show broadcast in the United States for more than 30 years until 1968, produced a string of popular records through its in-house choir. But while John-Mark Lapham and DM Stith have named their collaboration after the groundbreaking show, it would be tough to imagine the Revival Hour’s creator, Charles E. Fuller, playing too many of these songs on the air.

This almost accidental collaboration – Lapham wanted Stith to contribute to one song he’d been working on and they ended up making an entire album – covers a vast amount of ground at almost breakneck speed, and yet does it effortlessly, somehow remaining cohesive as a single record

In the opening three tracks alone they move from the pulsing electronics of ‘Control’ to the orchestral sweep of ‘Hold Back’ to the brooding, off-kilter sounds of ‘Pyre’. The undulating rhythms and wailing voices can make for a pretty unsettling listen, but – perhaps by virtue of its unpredictability – the album is never less than compelling.

Hints of old soul and doo-wop occasionally show their head but each sound is only hinted at before they drive on to something new, something different. There are hints of gospel too – they called themselves the Revival Hour for a reason – and there’s something of the church choir about ‘City Yolk’. But gospel’s strongest influence is in Stith’s lyrics, which are heavily flavoured by his upbringing in a strongly relegious community.

It is an emotional outpouring on every level, powerful sonically and lyrically, vast in the scale of its ambition and its achievement.