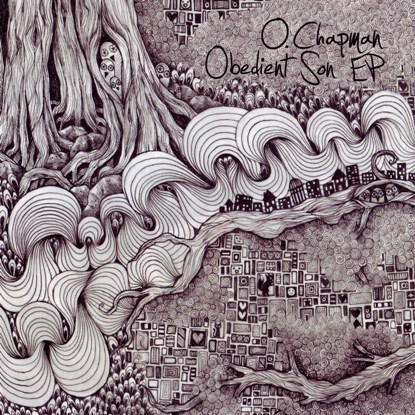 The wonderful O.Chapman has been in our good books, not to mention our one-to-watch books, for some considerable time now, and his 2012 debut EP ‘Obedient Son’ certainly didn’t let our expectations down. Recorded at the equally fantastic Dave Gerard’s home earlier this year, Chapman’s EP really manages to captivate and express his striking instrumental ability, as well as some lovely husky vocals that, upon listening, makes one feel like they should curl up next to a log fire with a glass of home-mulled wine. Sadly though theres not often an opportunity for us to do that, so instead, I’d say to just go out and buy the wonderful EP and have a little listen for yourself.

The EP starts with the opening track ‘Morning Song’, which reminds me of a beautiful mixture of several things. Instrumentally, it sounds almost Nick Drake-ish, with a lovely consistent melody and rhythm throughout, and the introduction of a violin really helps to give this particular track both depth and emphasis. Vocally, his voice sounds uncannily like several of the tracks from Bombay Bicycle Club’s second album (Flaws), and Chapman’s vocals take a strikingly resonant and warming tone throughout the song.

The following two tracks, ‘Being Me, Being No One’ and ‘Don’t Stop to think’, both run alongside a more defined rhythm, and being decorated somewhat more both instrumentally as well as with additional vocals, these really demonstrate Chapman’s songwriting ability. ‘Don’t Stop to Think’ is particularly good at this: whereby Chapman starts with a melody you could almost call upbeat, and manages to end on a completely different tone, both equally as impressive as the other.

The EP sadly ends with his last track ‘Come on Down’, which I might have to confess is a personal favourite of mine. Telling a beautiful and considerably sad tale of patience and desire, Chapman’s guitar lies at it’s rawest, and for me, most beautiful. Similarly, this track isn’t instrumentally  far off a tame version of Leo Kottke, and this song again displays Jack Steadman’s influence on Chapman. It really comes down to a stunning conclusion to a stunning EP.

Despite ‘Obedient Son’ being out for several months, every time I hear it, it honestly never ceases to amaze me. Moreover, with Chapman being a friend of mine and hearing some of his influences when writing the EP, his lyrics have the ability to be beautiful yet equally haunting, those kind that keep running through your mind hours after hearing them. Regularly gigging in and around London, try and catch Chapman live, and I hope you’ll agree with me every little bit that his music is really something splendid! Chapman plays a headline gig on the 5th January at the Camden Head, see here for more details.

The EP is available from Chapman’s bandcamp page, here.