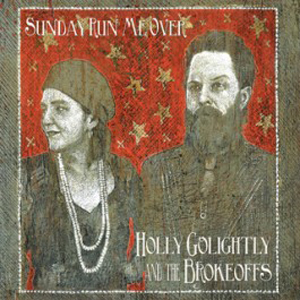 After the best part of twenty years, it’s clear that Holly Golightly will forever languish as the musician’s musician. Despite numerous name-checks and guest appearances on dozens of records by artists as far afield as Mudhoney and the White Stripes, she’ll always be part of that refined company who exist just the wrong side of the mainstream, among such luminaries as Tom Waits and Billy Childish, writing the songs and inspiring the albums that, while often inferior, go on to do much better business.

Nevertheless, for anyone with a taste for the offbeat or obscure, or a love for genre-music played pitch-perfectly with just the right inflection of irony, you can’t really beat Golightly and pals. Sunday Run Me Over, her fifth collaboration with ‘the Brokeoffs’ – code-name for regular collaborator Lawyer Dave – is a first class collection of spit-and-sawdust rock’n’roll that, like all great ‘cult’ music, seems to come from the future and sound like the past. This is best summed up by the clutch off offbeat covers, including references to Facebook introducing a storming interpretation of late 70s kitsch that sounds like it was recorded in 1952 (Hard to Be Humble) and a stripped-down slice of balladeering played more-or-less straight on the Davis Sisters’ I’ve Forgotten More that would sound good in any era.

Elsewhere, Goddamn Holy Roll is all dirty slide-guitar propelling full-throated hooting and hollering, the sound of the best backstreet boozer you’ve ever been drunk in. Hand in Hand is a duet with Lawyer Dave (who also takes the lead on Hard to Be Humble) that borrows, no doubt inadvertently, the melodic line of Jimmy Nail’s Crocodile Shoes. It’s a sweet song and packed with atmosphere which should one day provide the soundtrack to the point in an indie movie where the two romantic leads reflect on why they’ve fallen out. Goodnight has the lolloping, overblown sound and witty lyrics that once characterised Britpop; in a parallel universe it could be the highlight of one of Blur’s later albums – while One For The Road could have turned up on Parklife, if not a Victorian songbook of rabble-rousing pub-standards. It sounds a bit like Yellow Submarine with added barrel-roll piano and cockney walks.

If any criticism can be made at all, it’s that the tone remains resolutely arch throughout, and while the album has an authentic sound, that constant whiff of knowingness tends to keep the listener at something of a distance. Nevertheless, if it is music for the ears rather than the heart, it is still a stimulating experience all round, particularly when the taste towards the smart-arse becomes politically pointed. Most notably, A Whole Lot More… inverts the lyrics of Wayne Raney’s gospel standard, proclaiming ‘we need a whole lot less of Jesus and a lot more rock ‘n’ roll’. You can only say Amen to that.