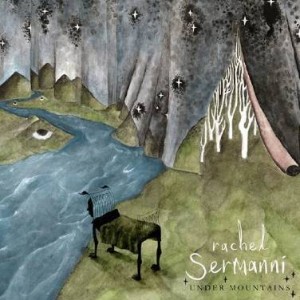 Glasgow-based Rachel Sermanni has been plugging away for a few years now, releasing various singles and EPs, but now the time has come for her to release a full-length effort with help from various piano and fiddle players that she’s toured with and from fellow Scottish folk band Admiral Fallow.

Under Mountains is, on the surface, a fairly intimate and sparse-sounding set of songs but upon further listens you’ll realise that Sermanni is actually trying to achieve a lot with very little. The backing vocals on ‘Sleep’ provide atmosphere and drama and ‘Sea Oh See’ is also very effective in this department. The harmonies of short interlude ‘Little Prayer’ are equally good. Added to this mix is a heavy amount of escalating in the arrangements. In particular, the tender and ever-blossoming orchestration of both ‘Eggshells’ and ‘Breathe Easy’ makes for spell-binding stuff.

Some aspects of the record also tread a slightly more whimsical line. ‘Marshmallow Unicorn’ is a song that’s notable just for its title alone (trying to imagine what this creature might look like is a lot harder than you’d expect it to be) and there’s something quite eccentric about lines such as “I am a
chocolate bar, the finest you can find” on ‘Ever Since The Chocolate’.

For all of its captivating qualities, ‘The Fog’ will stand out to many listeners as its most accessible
moment as it contains the strongest and most melodic chorus on the album. Based on this rather fine
and warm-hearted debut, Rachel Sermanni is one to keep a close eye on.