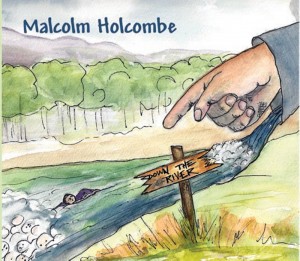 Malcolm Holcombe has never previously sounded like a man in much of a hurry. A 57-year-old of remarkable sideburns, the North Carolina bluesman was in his 40s when he finally got around to releasing his debut album, and the follow-ups have eased out at a rate of one every three or four years. Until now. Only a year after To Drink The Rain, Holcombe is back, and he sounds, well, a little pissed off.

This is an album born of an anger that gives it intensity and urgency. Holcombe is clearly fed up with the world around him. His frustrations rage forth through his trademark rasp, a voice that makes modern day Dylan sound smooth, and the likes of ‘Butcher In Town’, ‘Twisted Arm’ and ‘Trail of Money’ take few prisoners as they target greed and corruption. Such themes are hardly new in human history but they seem to be ever more prominent – particularly in an America still trying to get off its knees.

With plenty to be mad about, it can sound like Holcombe is just thrashing away at his guitar, but listen closely – his ramshackle sound can hide the real mechanics and it is only on the likes of ‘Gone Away At Last’ that his impeccable picking is obvious.

When Holcombe first recorded his debut album way back in the mid-1990s, he did so for Geffen, only for the label to then turn it down. Since then, Holcombe has bounced around a series of small labels, but Down The River is his first independent release. The artwork may be low-fi, but little else is. Calling on a contacts book compiled over two decades in the industry, Holcombe has put together an impressive castlist.

He shares a troubled history with Steve Earle, who joins him to duet on ‘Trail of Money’. Ex-Uncle Tupelo/Wilco man Ken Coomer sits behind the drums. Emmylou Harris sings background vocals on ‘Your Mercy’ – a greater contrast to Holcombe’s gruff lead is difficult to imagine.

It’s not just an extended rant. After ‘Trail of Money’ has served as a lengthy charge list of the guilty, the closing title track leaves us on a hopeful note. “They make the laws/ to suit themselves/ the ones that buy and sell the rest/ of us down the river,” Holcombe sings. “Down the river/ we pray for one another…we hold on to our dream.”