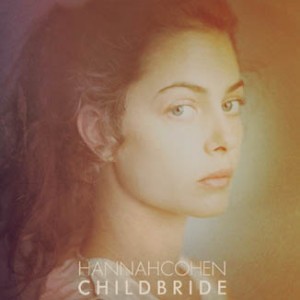 A first listen to Hannah Cohen’s debut album Child Bride may feel making a new friend who has a familiar face. Aspects of the album clearly resemble others’ good work, but it is surely best to take in Child Bride with fresh ears. The songs are surefooted and new.

This being said, it would be wise offer some of these positive comparisons so as to move past them. Hannah’s relaxed vocals are outstanding—somewhere between Sharon Van Etten and Nelly Furtado. The songwriting has sincerity that may appeal to Keren Ann fans. Production-wise, the oscillating moans that texture the album might remind the listener of portions of OK Computer. The simple, close acoustic approach to the core instrumentation feels like Norah Jones’ debut.

For a debut album, Ms. Cohen offers a rare degree of calm confidence—it seems that this is supported from several angles. First, the songs that she has written are simply very good. Also, the press releases about the album share that this work was steeped with venerable names from New York’s scene, thus support, contribution, and company of similarly brilliant collaborators was available to Ms. Cohen. Lastly, Ms. Cohen’s work as a photographer and model seem to have given her a keen aesthetic sense—gracefully seeking balanced, textured, palatable, and comprehensible art.

One highlight is the song ‘Sorry’, which is ideally listened to through a good set of headphones. It is balanced in such a way that the vocals are heavily placed in on the left channel and the sparse music is on the right. This subtly inclines the listener to tip her head to one side as if engaged in a daydream or deep thought. This physical effect is a delightful complement to the content of the song.

Hannah Cohen’s Child Bride has an undeniable warmth that is, on occasion, hidden behind melancholy. The closing track is aptly named ‘Sunrise’, as the listener will leave with a feeling akin to a cloudy morning what will soon evaporate into a beautiful sunny day. This is a bright new horizon for Hannah Cohen.