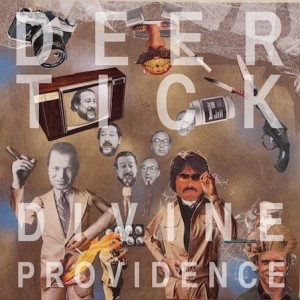 It’s easy to forget that the kind of music we love on this website is often very samey. Folk, country, blues – these are all age-old styles that really haven’t changed all that much for a long time. Your average folk fan will often love the lyrics, the timbre or the feel of a song rather than some perceived world-changing new sound. In fact, the only time it becomes really, truly obvious that these genres are pretty static is when something comes along that is so derivative, so stolid in its storytelling that it makes you irritated and leaves you longing for someone who actually has something to say. Step forward, Deer Tick.

Divine Providence, the band’s fourth album and a return to recording in their hometown of Providence, Rhode Island is no doubt meant to be a clarion call to their youth, a reliving of the bad old days of getting drunk, picking up chicks and telling stories about it afterwards. The problem is, their music has two feet firmly in the traditional and the stories were well-worn before they hit the microphone. A mix of blustering, punk-inflected country-rock and slower electric ballads, Divine Providence (and Tim, a follow-up EP being bundled along due to late UK release) is no doubt heartfelt, but never feels as though it has a heartbeat of its own. ‘The Bump’ sets the tone as frontman John McCauley applies his grindstone rasp to the line “We’re four grown men/but we act like kids”, and from there on in it doesn’t progress much past that point.

‘Something to Brag About’ adopts the poise and noise of ‘Johnny B. Goode’ but turns the main character into an unsympathetic, drunken arse, ‘Now It’s Your Turn’ makes a cack-handed attempt at eliciting a tear or two by mixing a country & Western weepie with Oasis and ‘Clownin’ Around’ tries to pull the same trick as Sufjan Stevens by humanising John Wayne Gacy, but fails as it appears to be a horse-drawn singalong, which seems a little, you know, completely wrong. Now don’t get us wrong, a little charisma goes a long way, and some of the more destructive of Deer Tick’s tracks certainly have it, but the focus on what McCauley has to say (or rather, what he doesn’t) never goes away. Even in the best moments, it’s hard to shake the horrifyingly celebratory lines in the hateful stomp of “Let’s All Go To The Bar” (choice lines: “I don’t care if you puke in my ride/Baby, just as long as you take a piss outside”).

There’s just nothing at stake – proselytising about the good times/bad times (delete as appropriate to song) is all well and good, but when you just don’t like the man singing it’s difficult to feel affected. The Tim EP seems to show at least some token appreciation of this fact, with far more time afforded to the music itself – ‘Born At Zero’ pounds its way through a guitar and organ duet and ‘Walls’ spends its 6 minutes acknowledging the band’s sometime Nirvana covers band alter-ego (Deervana, in case you were wondering) with a thick fog of instrument noise.

But the problem remains: whichever way you look at them, someone’s doing what Deer Tick are trying to do much, much better: If you want drunken rock ballads with a heart, listen to Titus Andronicus; if you want downbeat reflections on the 9-5, look to Barna Howard; if you want sung stories about John Wayne Gacy Jr., go to Sufjan Stevens. There’s a lot to be said for kicking back and enjoying some songs for the sake of songs, but Deer Tick just won’t let you let you, and it’s their greatest failing.