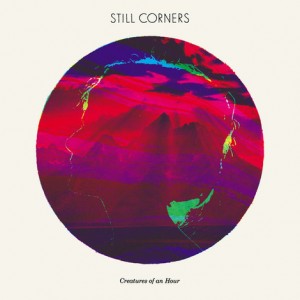 Dream pop as a genre is one that has always been associated with a certain kind of hazy, washed out ambience, one that reflects everything from youthful malaise to the kind of exhausted post-coital joy that only the most practiced of retro French movie characters can muster. It’s a difficult trick to pull off, because the sparseness required can easily become vacuous; after all, empty music without emotions is just that – empty. Still Corners aim to combat that issue by infusing their own attempt at dream pop with the echoes of classic film scores – Ennio Morricone has become almost a genre in and of himself nowadays – yet whilst they tick all the boxes for effort, it somehow still comes off as ultimately impassive.

That’s not to say that Creatures of an Hour isn’t interesting however – quite apart from anything else, the London four-piece have crafted an album saturated with intrigue. ‘Circulars’ weaves its way around a central carnival organ tone, ‘The White Season’s pulse ‘n’ twinkle synth is like a childish dub technique and  ‘Submarine’s sudden adoption of repetitive guitar and drum techniques that dream pop’s forefathers, the post-punkers would be proud of is as good as it is unexpected. So how can an album so well put together fall flat when it comes to how it feels? For want of a better pun about emotion, the heart of the issue lies with the vocals of Tessa Murray. Often pushed down in the mix and uniformly wan, each track, no matter how gracefully put together, seems more pallid as the vocals seep in. As a case in point, take album opener ‘Cuckoo’: for a song overtly about love and obsession it sounds an awful lot like Murray doesn’t care. Of course, lack of emotion can be as powerful as an overflow of it, but when neither instrumentation or vocals move past first gear for much of an entire album it’s hard to stay excited about something as definitively low-impact as Creatures of an Hour is.

Still Corners, without a doubt, have technical talent. They draw from the best of their genre, embracing the almost organic electronics of Beach House and the slowcore sensibilities of Galaxie 500 with extraordinary ease for a band releasing their debut album. But with all this attention to detail, the bigger picture has been ignored. The treatment of Murray’s vocals and her considered, unimpassioned delivery of them saps the more primal energy of the album, leaving it somewhat hollow. Creatures of an Hour leaves you wanting more, but just not in the way the band would have hoped for.

← Album | The Moth and the Mirror – Honestly, this world
EP | Jens Lekman – An Argument With Myself →