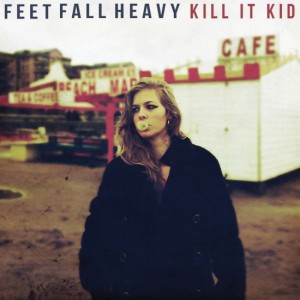 I’ll admit I’ve had a habit, purely on the basis of their name, of getting Kill It Kid confused with To Kill A King. Talk of killing things starting with ‘k’ and links to Communion Records were enough to leave my head in a bit of a mush. Only once did I manage to muddle them with the Kills, which is actually not bad going, given how my brain operates. But as it turns out, Alison Mosshart might have become the better comparison.

That’s because sophomore LP Feet Fall Heavy has left the acoustic folk of their eponymous debut far in the distance, and unleashed a powerful brand of blues-rock more akin to one of Jack White’s endless projects. Opening track ‘You’re In My Blood’ announces this in no uncertain terms as huge riffs and pounding drums compete with Stephanie Ward’s cool vocals. Not for the first time on this record, the sound is straight out of the Third Man Records playbook.

They then launch into the stomping ‘Heart Rested With You’, with Chris Turpin stretching his lungs to drive the most immediately anthemic song on offer. The album doesn’t all take place at 100mph an hour though, and ‘Wild And Wasted Water’ follows as a gospel-inflected howl-along. There’s a confident swagger here, never more so than when Turpin and Ward combine to belt out ‘Pray On Me’. It’s a confidence you don’t necessarily expect of a band from that most English of cities, Bath, when belting out an album with such a strong American accent. They only get close to overdoing it with the frequent use of scratchy clips of southern preachers from archivist Alan Lomax.

It’s at these points that it threatens to get a little too much, a little bit too stylised, but there are too many cracking songs for us to hold this against them for long. The gospel lament ‘Home’ hits the right spot before ‘Let Your Feet Fall Heavy’ brings things to a rousing conclusion. As Turpin belts out the final lines, one thing is for certain: I won’t be confusing them with To Kill A King any longer.