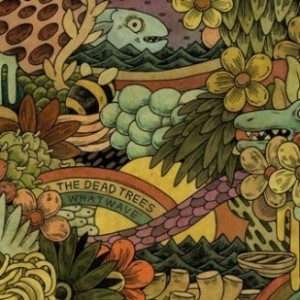 Languid garage rock is the American subgenre that refuses to die. It has endured, barely evolving, since being invented back in the 60s by the Velvet Underground, or maybe the Seeds. Its popularity waxes and wanes, sometimes breaking into the mainstream just long enough to make MTV interesting again, then returns to the backstreet dives of the big cities. Back where it belongs.

The summer months are always a good time to get reacquainted with this sort of music. It’s suited to long drives, light nights and madcap adventures. Whatwave, the second album by East Coast-turned-West Coast American hipsters the Dead Trees, is as fine a sunshine soundtrack as fans of this sort of thing could ever want to hear.

It goes without saying that the Dead Trees are on intimate terms with the Strokes. They’ve acted as backing band to both Albert Hammond Jr and Fabrizio Moretti over the last couple of years. Their sound is all fuzzy guitars and fuzzier vocals. The tracks barely break the three minute mark. Hell, the entire album doesn’t even make 30 minutes. On first listen there seems no doubt about it: this is music for cool kids. The really cool kids that snub you in night clubs.

But then, on the second spin it doesn’t sound so cool anymore. It sounds better than cool. It sounds fun. Playfulness isn’t something generally associated with these sort of bands, but Whatwave is drenched in it. There’s the wrapping, for starters, offbeat illustrations by celebrated artists Mel Kadel and Travis Millard. Then there’s the unusual manoeuvre of featuring the same song, ‘Faze’, played in three different styles.

The lyrics, too, are deadpan and subtly mocking of all the right targets, particularly when it comes to our increasingly bland and corporate world. “Down my street there was a barber/Now there’s just one more Supercuts” goes ‘Punch for Punch’, “Thank God I don’t still live round here”. Meanwhile, ageing hipsters get an strangely sympathetic going over in ‘Older’: “Problem was before you thought you’d have the time/To pull yourself together now that well has dried/And now your cool Village friends all know you’ve fallen behind”, before it’s admitted how this is usually the fate of all the cool kids: “You’ve handed down your worries/Now what was yours is mine”. It’s a refreshingly self-aware perspective. “You thought I had no feelings but I do” goes the chorus of ‘World Gone Global’. There’s plenty of feeling in fact. There might even be heart.

The sound is mainly Velvets, as you’d expect, with sudden lurches into Pavement. No sonic barriers are broken. There’s not a track here that couldn’t turn up on a Wes Anderson movie. All the same, it’s mighty infectious. Uplifting, in that uniquely American way. I defy anybody not to hear the jangling guitars and riff-heavy chorus of Arrows and not wish they were steaming down a long desert highway in a Dodge Polara convertible with the top down and this album blaring out at top volume.

So maybe American garage rock doesn’t evolve. Maybe it’ll sound the same for ever. Well so what? When it’s done as well as this it still sounds amazing. Long may it live on.