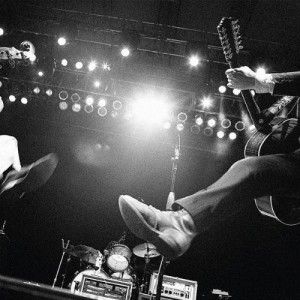 It’s an odd thing, the live album. If you like a band enough to buy one you’ve probably heard most of the songs before, maybe you even own them, and with better recording quality at that. It’s usually hard for to tell what – and more particularly who – they are for.

Yet one thing I can tell you is that We All Raise Our Voices To The Air by Albion-inspired American rock minstrels The Decemberists is a very good one. Here are a number of reasons why.

Firstly, it’s crowd pleaser. This is not a set of B-sides by a band holding back on playing their big hits. This is a band with populist appeal, really going for it and belting it out on a huge scale. Their most popular songs are there – ‘The Infanta’, ‘The Mariner’s Revenge Song’ – and recent singles like the fabulous David Foster Wallace-inspired ‘Calamity Song’. The crowd go wild for all of them – and well they
should. The rhythm sections are all bouncier than the standard album versions: The Decemberists want you to dance.

Secondly, it answers the question, evaded by the distinctiveness and variety offered on the band’s studio albums: “What do The Decemberists sound like?” – making all the turns of their career into one complete sound. It has an oddly uncanny effect, as if suddenly realising that three acquaintances you’ve met in different places are actually the same person.

Thirdly, it’s downright playful. The long pause of faux-tension after the gig’s opening chord. The extra little bits of piano and horns doing all that twaddly stuff that jazz musicians do. The cheers from the crowd during ‘The Mariner’s Revenge Song’ as someone gets swallowed by a whale. Swallowed in the song of course, not, like, live on stage.

As a potential consumer, then, there are two audiences for this album: hardcore Decemberists fans will obviously love it, but so I think will newcomers looking for some kind of Greatest Hits. If either of those people are you, raise your voices to the air.