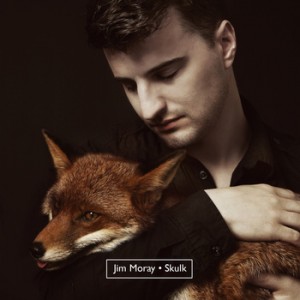 When Jim Moray’s last album came out in 2010, I featured it in the new release section of a folk music show I then hosted on student radio. Lively, complex and with all sorts of ideas and stylings from popular music, I expected my (less specialist) guests to love Moray’s In Modern History. “I’d just prefer it if he stripped it all away a bit,” moaned one. “Yeah, it would be nice to hear something a bit more traditional,” agreed another. They were wrong of course but then I guess there’s no pleasing some
people.

Fast forward a year and a half and Skulk may be that stripped down, earthier Jim Moray record that both his fans and critics had been waiting for. Well, for the most part. Moray is not an artist that likes to keep still musically and after the sparse Unthank-esque piano opener ‘The Captain’s Apprentice’, there are all sorts of new ideas underpinning what is initially a starkly more traditional offering when compared with Moray’s other records. Sometimes the innovations are subtle – unexpected time phrases, storming percussion; sometimes joyously obvious – ‘Big Love’ and ‘Hogeye Man’ for example jump head-first and energetically into whole new genre areas.

The thing that ties it all together is Moray’s ability to tell a story. He’s never afraid to sentimentalise his lyrics, to charge the narratives with a voice and emotion that can be easy to lose under the metrics of traditional vernacular verse. And most importantly, he’s always looking for the best way that an old story might be told anew.

It’s hard to please all the people all of the time, but on Skulk Moray may do just that with a set of approaches traditional in sound, modern in spirit and as agile, as contradictory and as cunning as a fox on a moped.