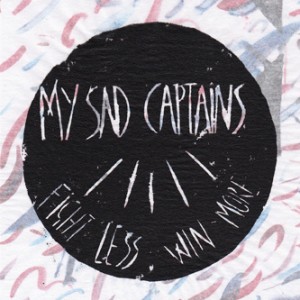 One suspects that Ed Wallis could feel lonely in a crowded room. While some musicians decamp, Bon Iver-style, to isolated woodland cabins to key into the creativity that isolation brings, Wallis decided to hole up in a borrowed house in, er, San Francisco. It’s difficult to believe that anyone could feel lonely in San Fran, but he nevertheless managed to connect with the themes of dislocation and remoteness that infuse My Sad Captains’ second album, Fight Less, Win More.

Songs penned and Wallis back in Blighty, the band sequestered themselves in a Cornish barn to pull the various components together – and how they come together on first track, ‘Orienteers’, a melancholic gem of understated beauty with the type of lyrics that get music journalists hot under the collar (“I reserve the right to decompose in front of your eyes.”) It’s wistful but not wallowing, resigned but never bitter and kicks along with a sense of purpose. Some well-judged, ethereal touches elevate ‘Orienteers’ to something approaching the aching loveliness of Bon Iver’s ‘Perth’.

‘The Homefront Pt 2’ begins with the same kind of promise, only to flounder in a woozy pit of noise, repetition and some inaudible vocals. This is clearly a jam that could have matured into something wonderful. On ‘Resolutions’, the band reprise their homage to late 60’s California-pop that characterised 2009’s Here and Elsewhere and drew inevitable comparisons with The Thrills (who also wrote much of their first album in San Francisco). It’s an ode to apathetic homesickness –“It’s a long way home/and you live alone”- that reveals itself over several listens and is almost irritatingly catchy.

Luckily, the Captains don’t stay sad for ever, and with ‘Heavy Lifting’ Wallis finally decides to get out of his pyjamas, have a shave and “drive to California to see the stars”. Clean undies on and with a refreshed outlook on life, our hapless wanderers also start to think about girls as on ‘Little Joanne’, an upbeat, 1960’s surf rock track that owes more than a little something to The Beach Boys.

Optimism spent, the Captains revert to introspective reverie and “Up and Away” and “Round and Back Again” bleed into a pretty but amorphous lump, like a gooey cake with no discernible layers. Some lovely synths and twiddly bits can’t detract from the fact that there’s not much going on beneath the production and that ‘Threes’ is sheer sleep-pop. Luckily, ‘Minah Bird’ has some oomph and drive as does Beatles-inspired ‘Duck And Cover’, which brings out a nice quality in Wallis’s vocal.

Fight Less, Win More is at once wonderful and frustrating. There are moments of such quiet magnificence you could weep, songs and bits of songs that are bordering on genius. Then there are tracks that feel a little unfinished, wishy washy and, dare we say it, lazy. Overall, it’s a diary of a band forging their own sound, exploring influences, and nearly getting it spot on. Perhaps next time Wallis will step outdoors, let his hair down a bit, maybe go for a beer in North Beach or a walk along the pier. He might be surprised at what he discovers.