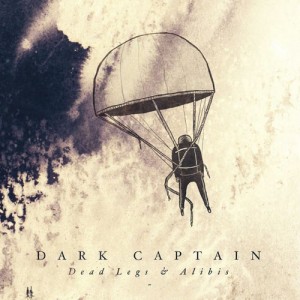 There could be any number of reasons why, since releasing debut LP Miracle Kicker in 2008, Dark Captain, Light Captain have decided to ditch the second half of their name, bringing us follow-up Dead Legs & Alibis under the simple moniker Dark Captain. Perhaps they’re making a move for the maccabre. Maybe they figured, seeing as how the critical acclaim for that opening effort was not matched in sales, they were better off operating out of the shadows. It could be they just wanted to save everybody some syllables.

Listening to the new record, it quickly becomes apparent this is not about a shift to a darker sound. Dead Legs & Alibis follows the same blueprint as before but, reflecting the growth of the band into a five-piece, expands their sound. Combining folk and psychedelia, it’s all pulsing rhythms, marshall beats, but softly spoken. The revolving guitar rhythms drill their way into your head while Laura Copsey’s electronics add sublime flashes. They don’t like being called folk, and no wonder when so much of what is bubbling under the surface of these songs would not be out of place on a Massive Attack record.

Single ‘Submarines’ is as infectious as anything you might hear this year before the soft beauty of ‘Long Distance Driver’ and the pounding rhythm of ‘Right Way Round’. The name may have contracted, but the sounds are soaring from this new-look line-up. It is surely only a matter of time before Dark Captain step out into the light.