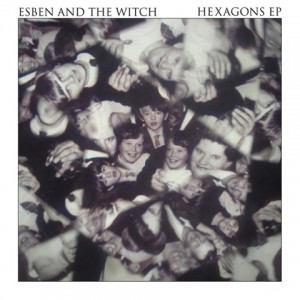 2011 has been a good year for those of us who thrive on female-driven, experimental, neo-goth, with the likes of Austra, Warpaint and Zola Jesus bringing their sexed-up, spiky versions of gothic gloom to the airwaves. With their latest EP Hexagons relative newcomers and Brighton natives Esben & the Witch demonstrate that the current spate of well-crafted doom-pop shows no sign of abating yet.

Debut album Violet Cries was released earlier this year to mixed reviews, with criticism mainly levelled at the lack of song structure and memorable tunes. Where it may have lacked in form, Violet Cries was heavy on atmospherics, and Hexagons is another meandering graveyard walk at midnight in frosty air. But by second track, ‘Hexagons II (The Flight)’, Esben demonstrate that they do have some decent guitar hooks lurking up their long, wizard’s sleeves. Coupled by a strong chorus delivered in Rachel Davies’ low caterwaul, Esben paint a picture of despairing yet tuneful abandonment.

This new found-flirtation with tunes you can actually hum along to translates into a seriously melancholy piano riff on ‘Hexagons III (The Surge)’, menacing in its simplicity, and some sparse, apocalyptic drum beats form the backdrop to the lyrics “The borders have broken/The borders are breached”. ‘III’ flows seamlessly into ‘IV (The Still)’, adding a gut-tingling bass drone and conjuring up images of bereft maidens wandering around a vampire’s castle in scanty nightwear.

By ‘Hexagons V (The Cast’) there is something approaching resolution, with a more predictable chord progression and a softening to the vocal which recalls the more lightly spoken (although no less creepy) Tasseomancy. However, final track ‘VI (The Thaw)’, brings us full circle and, like ‘Hexagons I (The Fall)’, is a mood piece that unpicks any sense of safety that has been created.

Although this EP will undoubtedly appeal to that demographic currently obsessed with being bitten by model-like vampires, for those of us somewhere north of 14, Hexagons has a complexity and sophisticated layering of sound that need not be listened to by candlelight whilst writing tortured poetry about death and how much life sucks. Then again, that might not be such a bad idea.