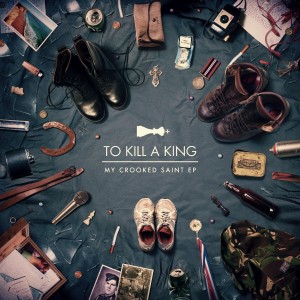 Sometimes it just clicks: one song, one listen, and you know a band will grace your favorites list. That’s the experience I had with To Kill a King, the latest Communion artist to tickle my fancy. The Virgin-released My Crooked Saint is a strong first showing from the Leeds quintet, full of compelling stories and folk-rock charm. Though I was hooked by powerful opener ‘Bloody Shirt’, the EP’s other three songs are just as gripping.

The band’s anthemic bent has already earned comparisons to Mumford & Sons, but that’s where similarities end. They’re more the National than new-folk, marrying orchestral arrangements with good ol’ guitar rock. Ralph Pellymounter’s rich voice carries the show: his stories are engaging and impassioned, from tender ‘Family’ to rousing epic ‘Wrecking Crew’. My Crooked Saint‘s energetic bursts (of which there are many) wouldn’t work nearly as well without his commanding presence; thankfully, though, the whole EP works wonders. Especially for a debut, it shows remarkable maturity and confidence.

Mark my words, To Kill a King are a band on the brink. Though they hint at influences like Arcade Fire and even Frightened Rabbit, the quintet has truly developed its own sound. They’ve crafted an enthralling sort of orchestral rock, simultaneously accessible and sophisticated. My Crooked Saint may not break new ground, but it certainly grabs attention—and it’s attention well-deserved.