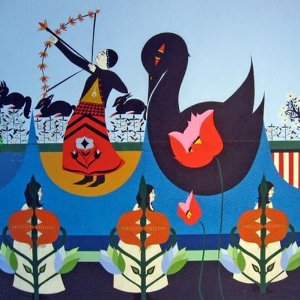 The Beatles, Bob Dylan, Simon and Garfunkel: Goodnight Lenin wear their influences proudly on their sleeves, like shoulder patches holding a worn out jacket together. It still fits and looks rather cool, but you can’t help wondering if it’s seen better days.

The Wenceslas Square is an accomplished EP – the song writing is very ambitious, with proper, specific stories to tell. And the lyrics are well supported by the music, which is uncrowded and carries a professionalism that should hold Goodnight Lenin somewhat above the glut of young acoustic pop bands.

But it rarely has the confidence to take off. The first and last track give some good pay-off musically, but the songs in the middle find it harder to grab my attention. I have a feeling they’d be more commanding live – the subtler dynamics of many a good band are lost in the recording studio.

What’s more, it’s hard to know what to do with a band whose music, although solid, does not match their lyrical ambition. Their throw-back sound seems to come right out of the examples in Simon Reynolds’s Retromania: Pop Culture’s Addiction to its Own Past. They’ve done the hard bit and emerged as strong, original songwriters. Now they need to do the other hard bit and escape (or substantially remould) their influences. I greatly look forward to hearing what they come out with next.