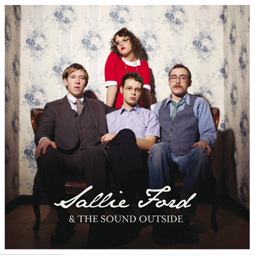 “What have these people done to music? I just don’t care anymore.” Sallie Ford is not happy. She makes this abundantly clear in, ‘I Swear’, the opening track to her debut album Dirty Radio. Left cold by modern music, Ford is going to take us back into the world of blues and rockabilly, producing a record that may not sound quite like it was recorded in the 1950s, but isn’t far off. Punk music did not have arrive until the 1970s, but Ford adds a little of that spirit too. There is an angry undertone throughout – it is not just the state of music that has left her cold and she’s going to tell you about it in a record that makes for a rollicking ride.

The Portland artist has been blessed with an ideal voice for the kind of music she clearly adores, her raspy yet powerful vocals adding an old-timey character while her band bring big beats and pulsing rhythms. Retro records have been coming in droves in recent times, navigating the path between paying homage to the greats and just sounding like a poor relation with mixed results. Ford stays just the right side of that line with by throwing in a strong dose of soul and raw emotion, while singing edgy lyrics that don’t shy away from tough issues. Nowhere is this more obvious than on ‘Thirteen Years Old’, about a youngster coming to terms with her father’s death.

But it is on the faster tracks that Ford shines. ‘Cage’ sounds like an old dancehall classic while ‘This Crew’ might even get your parents dancing (Hmm. Perhaps that should count as a criticism.). If we were to have a complaint, it is that too much of the second half of the LP is conducted at a slower pace, with a danger of being too one-paced. But minor gripes aside, this is a fine sounding debut.