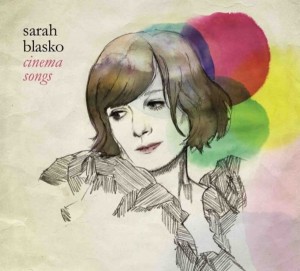 If you’re looking for new material from Sarah Blasko, Cinema Songs is not going to help you out. There’s nothing new here at all. Not only are the five tracks all covers – but they were already released, at least in her native Australia, as bonus tracks on a deluxe edition of As Day Follows Night. But while it may not be new, it is wonderful.

Blasko, a long-time fan of musicals and soundtracks, has handpicked her favourite songs to cover. Songs from The Sound of Music, Cabaret, Fame, Annie Hall and Xanadu get the treatment. The result is a set of familar songs heard in a new way. There’s nothing fancy about Blasko’s arrangements – just her and a piano – but it can be brilliantly effective. Showing off her classy voice, Blasko immediately carries you off to some after-hours bar for a thrilling performance.

‘Seems Like Old Times’, taken from Woody Allen’s Annie Hall, sounds as beautiful as ever, while the kitschy ‘Xanadu’ gets a major overhaul and comes up smelling of roses. The highlight might be the reworking of The Sound of Music’s Something Good, but you can imagine everyone will have their own personal favourite among a set of songs so many will know well.

Cinema Songs is nothing new, nothing clever, but it is a delight all the same.