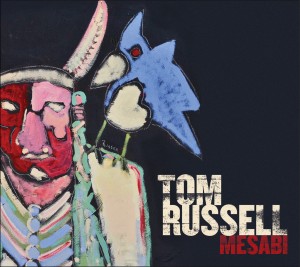 A new Tom Russell album is always an event, and the veteran shows no signs of slowing down as he closes in on his seventh decade.

And, from the rollicking ‘And God Created Border Towns’ and the title track to the tender ‘When The Legends Die’ (“Aw kid don’t cry, it’s just a cowboy lullaby”) and ‘Roll The Credits, Johnny’ – the latter possessing a similar feelgood beauty to Giuseppe Tornatore’s Cinema Paradiso – Russell is on his best form in some time on Mesabi.

The Russell trademarks are alive and well – the focus on the borderlands of El Paso and Juarez, the Pavlovian tendency to yelp like a small terrier upon mentioning the Rio Grande in any context, and the tributes to characters who could otherwise have easily slipped off the radar. In the latter category this time around we find Bobby Driscoll, the former child actor who starred in Treasure Island and Peter Pan (Farewell Never Never Land) and musician and voice actor Cliff “Ukelele Ike” Edwards (The Lonesome Death Of Ukulele Ike), alongside the better-known Liz Taylor and Godfather actor Sterling Hayden. Typically, the latter’s eponymous tribute song focuses on his sailing and his years living on a canal barge in Amsterdam as much as his acting credits.

Another recurring theme through Russell’s music is the mention of American sports – but, alongside the baseball and American football references on this occasion can be found a song, Jai Alai, about a form of Basque pelota (a relative of squash). A fine song it is, too, with Russell displaying his uncanny knack of using the isolation or danger of the sport – fatalities have been recorded in jai alai, with ball speeds reaching a world record of 204mph – as an analogy for the participant’s life and love (see also ‘Gallo Del Cielo’, ‘The Pugilist At 69’).

There are twin themes running through the album, both wrapped up neatly in the two bonus tracks. The cinematic feel already alluded to is furthered by the presence of ‘The Road to Nowhere’, the title track from Russell’s soundtrack to Monte Hellman’s new movie which also features ‘Roll The Credits, Johnny’. Alongside that, though, is a tribute to Bob Dylan and his influence on “the troubadour kid” of the title track – Dylan grew up in the Mesabi region and a cover of his ‘A Hard Rain’s a-Gonna Fall’, featuring Lucinda Williams and Calexico, forces home the message.

This is a wonderful new set from Russell, who will be well worth seeing when he tours the album in the UK early in the new year.