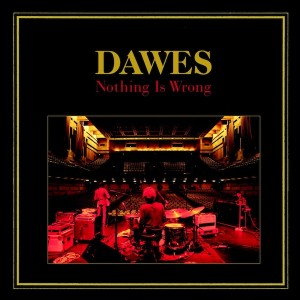 As the only Californian on the For Folk’s Sake writing roster, I felt it was my duty to grab Nothing Is Wrong by Dawes. Not only are they from Malibu, an oceanside haven near Los Angeles, but they sound more Californian than most other bands from the Golden State. The quartet draws inspiration from the Laurel Canyon music scene (which historically includes such musicians as Joni Mitchell and Crosby, Stills, & Nash), and even named their 2009 debut North Hills. Their sophomore effort still gives a nod to their esteemed SoCal heritage, but moves far beyond homage or imitation – Nothing Is Wrong is truly, and magnificently, their own.

If Dawes has learned one thing from their folk-rock forebears, it’s the power of good songwriting: the arrangements are tight, the choruses swell, and every word has its place. Written primarily on the road, Nothing Is Wrong speaks of transformation and transience, the mixed emotions that come from leaving home and growing into one’s self. Frontman Taylor Goldsmith captures these sentiments with remarkable clarity; each of the album’s eleven tracks strikes that sought-after balance between personal and universal.

Standout songs like “Coming Back To a Man” and “If I Wanted Someone” simply and effectively tell tales of relationships gone sour, while “Time Spent In Los Angeles” describes the city’s melancholic beauty. Even if you’ve never seen a West Coast beach, you can still find your own version of home in these world-wise songs of coming and going.

Where North Hills was folky, Nothing Is Wrong is amped-up country-rock. This is far from a bad thing; the extra oomph adds to the sense that Dawes have found their footing. While their debut was promising, this second LP proves that the Malibu band is a force to be reckoned with. Nothing Is Wrong is nothing short of excellent, and I can’t wait to see where the band goes next.