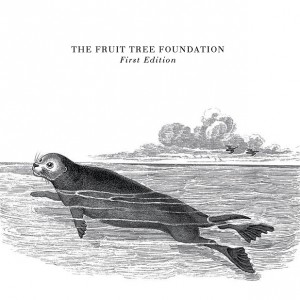 It’s hard to make a good indie rock album. Harder still if you’re a band of mostly folk musicians plonked in a house together for only five days. And yet, here on this splendid fourteen track album, First Edition, Scottish collective The Fruit Tree Foundation have not only done exactly that, but also made what is to my mind one of the most interesting British rock releases in the last couple of years.

The line-up is, to a certain type of anorak music fan (my hand is up proudly volunteering myself for this title) absolutely stellar: members of The Twilight Sad, Idlewild and Frightened Rabbit, as well as Emma Pollock, Karine Polwart, James Yorkston and Alasdair Roberts. And if that list conjures fond memories of last year’s Burns Unit collective, which boasted some of the same names, this album, if anything, may exceed your expectations.

Roberts is the only one of the group to keep things resolutely folky, a nice counterpoint to the rich and versatile indie rock of the rest, a rock with aggression to drive forward nicely but softened at the edges by the lure of those rich Scottish accents. And a rock with plenty of time for acoustic and piano numbers. A rock, maybe, that looks across the Atlantic to bands like The National more than to more lacklustre Scottish exports such as Biffy Clyro.

The group assembled to raise awareness of the Mental Health Foundation, making this also a charity record. One of the charity’s slogans is the subtle and actually quite affecting pun “changing minds” and although little of the album seems much tethered to issues of mental health, it is written in the spirit of change, in the spirit of new angles and interests and transformation.

In short, The Fruit Tree Foundation are good for you – why not take a bite?