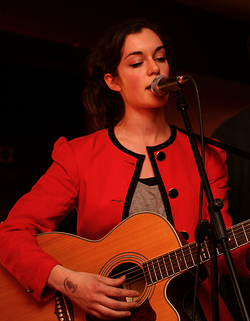 The ever wonderful Bandstand Busking have announced they are to curate two free shows at Richard Thompson’s Meltdown festival this month.

The first gig, which takes places this Sunday (13th June) from 1-7pm, features Sam Amidon and Laura Hocking – who FFS has been unable to stop listening to of late – as well as Oh Ruin, Trans Siberian March Band, Belles of London City and Soname.

And it only gets more exciting next week as FFS stalwarts Slow Club, Broadcast 2000 and Johnny Flynn take to the stage along with John Smith, Kate Tempest, Appalachian Storm and the Crystal Palace Brass Band.

Both shows take place at the specially-constructed Clore Ballroom Bandstand at the Royal Festival Hall, London.

The chaps at Bandstand Busking said: “We were pretty pleased to hear that we’d be able to put together the lineup for two Sunday’s in June – the 13th and the 20th. Richard did ask us to mix in a bit of variety in to our lineups – and we took this as an exciting opportunity to bring something a bit different to the bandstand busking stage alongside some of the best examples of our usual folksy leanings.”

Register your attendance and invite your friends to the 13th June and 20th June shows on Facebook.