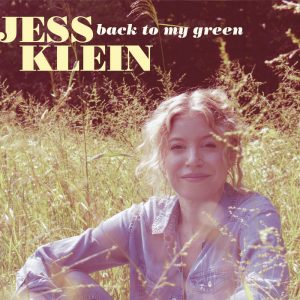 In the four years since her last album Jess Klein has gotten married; moved from Austin, Texas to Hillsborough, North Carolina; suffered from Repetitive Strain Injury and crushing insecurity based on the 2016 election and moving into an environment where she knew no one. Yet despite all that, Back To My Green is a call to hopefulness despite all the evidence to the contrary. It’s also the antithesis of the album she expected to put out.

The album that she planned with producer Mark Simonsen in her new locale was supposed to be stripped down and raw. But that all fell to the wayside as the two, along with engineer Thom Canova, started to experiment, creating something much looser. Ideas got bigger, arrangements became more involved, and by the time Simonsen suggested the addition of strings for two of the tracks, Klein reacted without hesitation, “Hell yeah! I’ll figure out how to pay for all this later!”

“I became determined to write songs about being strong and resilient and finding hope and healing.” Those themes resonate throughout Klein’s twelfth record. On ‘Mammal’, a song that keeps getting bigger and bigger, she makes it clear, “I just don’t choose to sit in blame, or sink so low I need to run and hide, I’m better at breathing.” More in your face lyrically, ‘Blair Mountain’ is less a song than an examination of how the quest for oil has destroyed that natural habitat. There’s a Dylan-ish tinge to ‘Gates of Hell’, “I called my daddy, I said ‘please don’t make me beg,’ He said, ‘I’d like to help, but the bank repossessed my legs.’”

If hope is the answer, Jess Klein has it in spades. She refuses to be brought down by those forces that dominate the conversation simply because they speak the loudest. The songs on Back To My Green carry the day because, regardless of the situation, the only answer that makes sense is continuing to hope and to heal. There is no other choice.