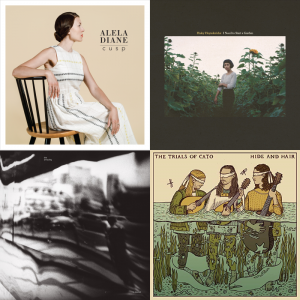 As the year is drawing to a close we asked FFS writers to share their highlights from what, we all agree, has been a pretty good year for music. You’ll find a selection of tracks for these artists on our playlist.

Bob Fish
The Trials of Cato’s ‘Gloria’ (from Hide and Hair) combines banjo, bouzouki, and guitar and appeals far beyond expectations. When combined with lyrical content that it is in the tradition, yet as modern as today you get Gloria, a tale of sexual identity and self discovery.

Using little more than an acoustic guitar, an electric guitar, and some piano flourishes, ‘Asking for a Friend’ by Sweet Billy Pilgrim (from Wapentak) provides questions without answers. Yet there is a glory to this piece that moves me every time I hear it, proving that the core great music is always an incredible song.

The harp is one of those instruments generally associated with classical music. In the hands of Mary Lattimore, ‘It Feels Like Floating’ (from Hundreds of Days) is subtle and airy without every threatening to disappear with the slightest breeze. Combining traces of electronics and guitar, it redefines what a harp can do in the right hands.

For those who are fans of the fugue, you won’t find one timelier than Ben Comeau’s ‘Donald Trump Is A Wanker‘. Built around the theme to Jack White’s Seven Nation Army, this is classical music, but pointedly so. It demands to be heard and gets more relevant every day!

David Crosby was made to sing harmony. This is a fact that simply cannot be denied. This recording of ‘Woodstock’ from his latest release illustrates that perfectly, and is just about flawless. Not bad for a seventy-seven year old man.

Jonathan Frahm
Something more evident to me in 2018 than in recent years prior has been the wide breadth of sound that folk now envelops. The lines between it, pop, and Americana have blurred even more, producing cool, innovative pieces from powerhouses like Dhruv Visvanath or, of course, Amy Helm. Saint Sister is a fast-rising folk act that is no stranger to electronic influences! In this bold new world with cringing folk purists abound, there are also a bevy of traditional contemporary works that are quite worthy of note. From off the top of my head, Kyle Carey, Christine Fellows, The Brother Brothers, and Geoff Gibbons all had great releases along these lines.

Lastly, what I’ll add is don’t turn a blind ear to your local music scene! Here in Tucson alone, the likes of Joyce Luna, Rebekah Rolland, and Jacob Acosta have all made wonderful folk albums that are all greatly varied in their scope, sound, and purpose.

Duncan Martin
Firstly, a big thank you to everyone who took part in the sessions this year. In a way these are my musical highlights for 2018, and in that list you’ll find artists who have released some great records this year and others with a very promising 2019 ahead of them.

Aside from those good people, a few others stand out. Cusp by Alena Diane is an excellent album, particularly ‘Ether & Wood’ and ‘Wild Ceaseless Song’ and their focus on the passing of time, family and human connections.

Although I’m wary about recommending things that I’ve only discovered recently, I have to acknowledge the amount I’ve been playing Last Decade of Love by Tsarzi in the last few weeks. More quirky pop then folk, it’s clever, fun, theatrical and in the end, deeeply melancholic. It’s not quite like anything else I heard this year while still being very accessible.

Ian Parker
It’s not exclusively true, of course, but if we apply broad strokes it seems clear that women have been making better music than men for a while now. That becomes obvious when I make a shortlist of candidates for my album of the year. Haley Heynderickx, Snail Mail, Soccer Mommy, Tess Roby, Alela Diane, Lucy Dacus, LUMP (Laura Marling doesn’t know how to make a bad record, or even an average one)… you can spot a theme. The boygenius EP was a late bonus to round off the year too – we can only hope this side-project has more chapters to be written. The only exception on the list, Aaron Dessner and Justin Vernon’s Big Red Machine, was a tip given to me by the final entry on the list, Anja Plaschg of Soap&Skin, so it all fits a pattern anyway.

Lorenzo Righetto
In terms of discovery, 2018 has been a great year. From the point of view of musicians and songwriters, being isolated and remote in the music archipelago seems to be fruitful: less anxiety on what “should be” in a record, how you should play and what, etc. The isolation is even better if it’s geographical as well as artistic: out of the top ten albums for me this year, I can count only three by British or American artists (and one of them has published a record sung in Cornish). Despite all paying tribute, of course, to the Anglo-Saxon contemporary music culture, each has its own peculiarity, sometimes stemming from the very local scene, such as jangle in Australia/New Zealand.

For my two best songs, I chose ‘A Million Days’, from one from my favourite album this year, In Transit by Swedish veterans The Amazing, a collection of absorbing suites in the vein of Red House Painters and Midlake. And from my “rookie of the year”, Haley Heynderickx, who has penned the best track for me this year, ‘The Bug Collector’, with its minimalist narrative and memorable melody.