No Burden, recorded in 20 hours as a school project, led to a 20 label bidding war for Lucy Dacus. When 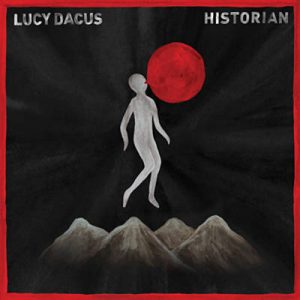 the dust settled she signed with Matador, mostly because they saw her live rather than simply watching her on YouTube. Coming to grips with overnight success is fraught with consequences. The results of all this attention are visible on Historian, an album that comes with heightened expectations. “I never considered a career in music because it was too unattainable. I just didn’t believe it was possible.”

The two years she spent on the road taught her a lot. Instead of getting caught up in the whirlwind, Dacus managed to remain focused. Fresh material was recorded in a Seattle studio with a new producer, but she rejected it and ended up in a Christian rock studio in Nashville, again produced by Colin Pastore. But this time she knew exactly what she wanted, having already arranged the music and planned the track list.

This time, after spending seven days in the studio, she emerged with a mature work, remarkable in tone and texture. The opening track, ‘Night Shift’, has more than its share of bile for an old lover, “You got a 9 to 5, so I’ll take the night shift, and I’ll never see you again if I can help it.” That refrain at first played softly, then followed up with guitars blazing makes it clear how happy she is to be finished, especially when she adds, “In five years I hope the songs feel like covers, dedicated to new lovers.”

‘Addictions’ covers similar ground but there’s a sense of defiance, too. “I knew one day it’d be so hard to have you buy my side. Now I’m awake at 2 a.m. without a cause to draw you in.” Horns blaze with the joy of being free from the pain. The dynamic in Next of Kin Couldn’t be more different. Ostensibly about the death of her grandmother, it’s also a treatise on coming to grips with one’s own life. “ I am at peace with my death, I can go back to bed.”

For a second effort at the ripe, old age of 22, Lucy Dacus has proven that she is an artist worth watching. She is not afraid to say what is one her mind. Her lyrics ring true and her music matches up perfectly, like the guitar solo on ‘Your and Mine’. The forty-eight minutes of Historian are an incredible achievement at any age.