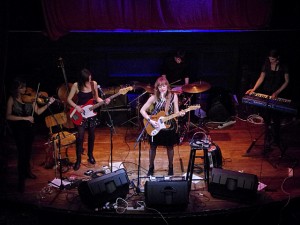 Emily Barker & The Red Clay Halo have announced that their upcoming tour in November will be their last together for a while. After nine years of recording and touring together, The Red Clay Halo – Jo Silverston (cello), Anna Jenkins (violin) and Gill Sandell (accordion, flute, piano) – are taking a break to concentrate on other projects.

Because of this, they have decided to ask their fans which songs they should be playing on the tour, and as a result are currently rehearsing several songs they haven’t played for some time, including selections from all four albums they have recorded together, ‘Photos.Fires.Fables’ (2007), ‘Despite The Snow’ (2008), ‘Almanac’ (2011) and ‘Dear River’ (2013).

They will also be joined by a rolling cast of special guests singing Frank Turner’s part on the band’s murder ballad ‘Fields of June’, including Robbie Boyd in London, Jo Dudderidge (The Travelling Band) in Manchester and Jamie Freeman in Lewes.

The tour begins in Lewes next Tuesday, hitting London’s St. James Church on November 19th before finishing in Penzance on the 23rd.