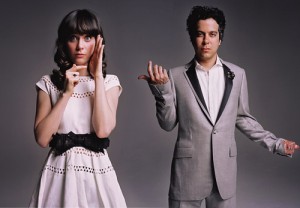 She and Him have released a short teaser of new record ‘Classics’ which is set for release later this year. ‘New Girl’ star Zooey Deschanel and M. Ward topped the US folk charts with previous offerings Volume 2, A Very She and Him Christmas and 2013’s Volume Three and are now set for their first release since moving from Merge Records to Columbia Records last year.

The trailer for the new record features a snapshot of a cover of Carole King and Gerry Goffin’s Oh No Not My Baby with Classics described as “an album of timeless standards.”

Deschanel says of the album, “We are incredibly excited to release a record of our favorite songs. It was a dream of ours to record these songs in a way that highlighted the brilliance of the songwriting and the beauty of their melodies. We had a wonderful time making the record and we hope people have a wonderful time listening to it”

You can check out the teaser video below: